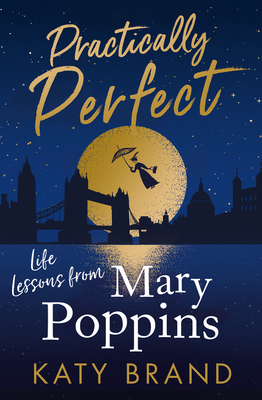 
On Our Shelves Now. Click on title for location specific availability.
Mary Poppins is a story of taking practical steps towards happiness. It's looking at the bright side of life. It's setting boundaries, deciding what you want and making it happen. That's the path to being Practically Perfect

For comedian Katy Brand, part of the joy of watching Mary Poppins as a child was the thrill of the film's iconic, no-nonsense heroine. Her unshakeable confidence, her staunch independence, and that touch of magic. Now she's all grown up, Katy takes another look beyond the talking umbrellas, bottomless bags and dubious cockney accents to show that Mary's still got something to teach us.

She explores how the beloved nanny was brought to life from the page to the big screen, and delves into her most striking memories to uncover themes that are still as important now as they were at the time, from women's rights and poverty, to toxic masculinity and work-life balance.

With interviews and insights from famous fans and friends, Practically Perfect is the common-sense manual for life that we never knew we needed, and sprinkles some supercalifragilistic magic along the way.

Katy Brand is an award-winning writer, comedian and actor. After starting to write and perform comedy as a student, she spent a few years working in TV production. In 2005 Katy went back to the stage, taking her debut comedy show 'Celebrities are Gods' to the Edinburgh Fringe, which later became her award-winning ITV sketch show, Katy Brand's Big Ass Show. She published her first novel, Brenda Monk is Funny in 2014, went back to the Fringe in 2016 with her critically-acclaimed live show, 'I Was a Teenage Christian' and wrote a play, 3Women in 2018. Her first non-fiction book H was published in 2019, and in 2020 she made her West End debut in 'Everybody's Talking About Jamie!' It may be time for a sit down.