Northerners: A History, from the Ice Age to the Present Day (Hardcover) 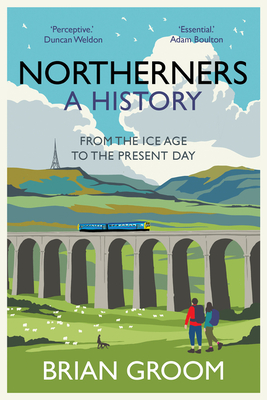 Northerners: A History, from the Ice Age to the Present Day (Hardcover)


On Our Shelves Now. Click on title for location specific availability.
The Times No. 3 BestsellerA Waterstones 'Book You Need to Read in 2022'

The definitive history of the North of England as told through the lives of its inhabitants.

A work of unrivalled scale and ambition, Northerners is the defining biography of northern England.

This authoritative new history of place and people lays out the dramatic events that created the north - waves of migration, invasions and battles, and transformative changes wrought on European culture and the global economy. In a sweeping narrative that takes us from the earliest times to the present day, the book shows that the people of the north have shaped Britain and the world in unexpected ways.

At least six Roman emperors ruled from York. The Anglo-Saxon kingdom of Northumbria was Europe's leading cultural and intellectual centre. Cartimandua, Queen of the Brigantes, deserves to be as famous as Boudica. Neanderthals and Vikings, Central European Jews, African-Caribbeans and South Asians, have all played their part in the making and remaking of the north. Northern writers, activists, artists and comedians are celebrated the world over, from Wordsworth, the Brontes and Gaskell to LS Lowry, Emmeline Pankhurst and Peter Kay. St Oswald and Bede shaped the spiritual and cultural landscapes of Britain and Europe, and the world was revolutionised by the inventions of Richard Arkwright and the Stephensons. The north has exported some of sport's biggest names and defined the sound of generations, from the Beatles to Britpop.

Northerners also shows convincingly how the past echoes down the centuries. The devastation of factory and pit closures in the 1980s, for example, recalled the trauma of William the Conqueror's Harrying of the North. The book charts how the north-south divide has ebbed and flowed and explores the very real divisions between northerners, such as the rivalry between Lancashire and Yorkshire.

Finally, Brian Groom explores what northernness means today and the crucial role the north can play in Britain's future. As new forces threaten the fabric of the UK again, this landmark book could scarcely be more timely.

Brian Groom is a journalist and a leading expert on British regional and national affairs. His career was spent mainly at the Financial Times, where he was assistant editor and worked in various capacities. He is also a former editor of Scotland on Sunday, which he launched as deputy editor and which won many awards. Originally from Stretford, Lancashire, he returned to live in the north - in Saddleworth, south Pennines - in 2015. This is his first book.