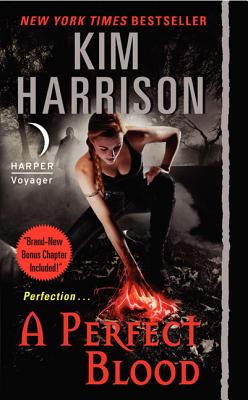 This is book number 10 in the Hollows series.

“I wouldn’t miss a Kim Harrison book for anything.”
—Charlaine Harris

There’s nothing more darkly satisfying than time spent in the Hollows—New York Times bestseller Kim Harrison’s alternate urban fantasy Cincinnati where vampires, pixies, and werewolves roam free. Harrison takes us back in A Perfect Blood, as former bounty hunter witch-turned-reluctant daywalking demon Rachel Morgan investigates a series of ritual murders, only to discover to her horror that whomever—or whatever—is responsible is actually seeking her blood.  Rachel’s sexy, supernatural adventures have consistently landed atop bestseller lists from coast-to-coast, and A Perfect Blood is no exception—another supremely satisfying excursion to a deliciously eerie fantasy realm that’s certain to delight Kim Harrison’s voracious army of fans…not to mention Laurell K. Hamilton, Charlaine Harris, Jim Butcher, Kelley Armstrong, Patricia Briggs, and Stephanie Meyers aficionados, and any reader who craves a walk on the wild, dark side.

“Harrison’s colorful cast of supporting characters keeps the story moving among the fast-paced action scenes. Longtime fans will obviously be standing in line for this one. However, readers with any interest in urban fantasy can easily jump into the story.” — Library Journal

“With the end of this popular series coming soon, fans will be savoring the remaining episodes all the more, and those who have delayed entry will begin jumping on board.” — Booklist

“The pace and tone of A Perfect Blood reflects its protagonist: a little more cautious, reflective and purposeful, and the book is more powerful as a result…Harrison provides the strongest and most self-assured Rachel we’ve seen yet.” — Miami Herald