High Price: A Neuroscientist's Journey of Self-Discovery That Challenges Everything You Know About Drugs and Society (Hardcover) 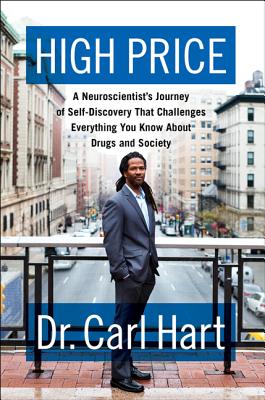 High Price: A Neuroscientist's Journey of Self-Discovery That Challenges Everything You Know About Drugs and Society (Hardcover)

High Price is the harrowing and inspiring memoir of neuroscientist Carl Hart, a leading researcher in the field of drug addiction, who grew up in one of Miami’s toughest neighborhoods and, determined to make a difference as an adult, tirelessly applies his scientific training to help save real lives.

Young Carl didn't see the value of school, studying just enough to keep him on the basketball team. Today, he is a cutting-edge neuroscientist—Columbia University’s first tenured African American professor in the sciences—whose landmark, controversial research is redefining our understanding of addiction.

In this provocative and eye-opening memoir, Dr. Carl Hart recalls his journey of self-discovery, how he escaped a life of crime and drugs and avoided becoming one of the crack addicts he now studies. Interweaving past and present, Hart goes beyond the hype as he examines the relationship between drugs and pleasure, choice, and motivation, both in the brain and in society. His findings shed new light on common ideas about race, poverty, and drugs, and explain why current policies are failing.

Carl Hart is an associate professor in the departments of psychology and psychiatry at Columbia University. He is also a research scientist in the Division of Substance Abuse at the New York State Psychiatric Institute; a member of the National Advisory Council on Drug Abuse; and on the board of directors of the College on Problems of Drug Dependence and the Drug Policy Alliance. A native of Miami, Florida, he lives in New York City.

“Moving and inspiring…. Hart’s memoir… is deeply honest and often painful. And his account of the ways in which scientific evidence has been ignored in the war on drugs is as alarming as it is fascinating.” — Boston Globe

“Hart’s account of rising from the projects to the ivory tower is as poignant as his call to change the way society thinks about race, drugs and poverty.” — Scientific American

“A hard-hitting attack on current drug policy by…a neuroscientist who grew up on the streets of one of Miami’s toughest neighborhoods…An eye-opening, absorbing, complex story of scientific achievement in the face of overwhelming odds.” — Kirkus Reviews (starred review)

“A refreshing new analysis of drug use that reveals how common misconceptions about illegal drugs are far too often not based on empirical evidence. . . . . [A] thought-provoking…[and] important work on substance abuse.” — Library Journal (starred review)

“It’s not every day you read a book that blows the lid off everything you’ve ever been taught about drugs, but Dr. Carl Hart’s recent work, High Price, does just that. Part memoir, part myth-buster, this fast-paced read details his journey from a violent Miami ghetto to the halls of one of the world’s most prestigious universities. Chapter by chapter Dr. Hart dismantles myths about crack, meth, and other drugs, while offering a biting critique of current drug policy.” — Huffington Post

“In his new book High Price: A Neuroscientist’s Journey of Self-Discovery That Challenges Everything You Know About Drugs and Society, Carl Hart blows apart the most common myths about drugs and their impact on society.” — Kristen Gwynne, Salon.com

“This mixing of personal story and hard research is interesting and appealing, in part because Hart isn’t preachy and partly due to his unique history as someone who actually lived that which he’s trying to help others avoid.” — New Pittsburgh Courier

“A seminal contribution to the conversation about the intersection of the legal system and drug addiction from a bodacious brother with both street credibility and academic credentials.” — LA Sentinel