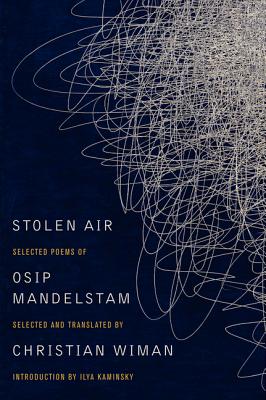 
Not on our shelves. Usually ships in 2-5 days.
Osip Mandelstam was perhaps the most important Russian poet of the nineteen-hundreds—a  crucial instigator of the “revolution of the word” that took place in early twentieth-century St. Petersburg and a political non-conformist who earned the enmity of Stalin and his totalitarian regime. With Stolen Air, Christian Wiman, editor of POETRY, America’s oldest and most prestigious magazine of verse, offers a new selection and translation of Mandelstam’s poetry—from his hard-edged and highly formal early poems to his almost savagely musical later works—for a new generation to be moved by, marvel at, and appreciate.

Christian Wiman was born and raised in West Texas. He is the editor of Poetry and the author of three collections of poems, Every Riven Thing, Hard Night, and The Long Home, and one collection of prose, Ambition and Survival: Becoming a Poet.

Osip Mandelstam (1891-1938) was born and raised in St. Petersburg. Along with Anna Akhmatova and Nicholas Gumilev, Mandelstam formed the Acmeist group, which advocated an aesthetic of exact description and chiseled form, as suggested by the title of Mandelstam's first book, Stone (1913). He settled in Moscow in 1922, where his second collection of poems, Tristia, appeared. In 1934 Mandelstam was arrested and sent into exile. He wrote furiously during these years, and his wife, Nadezhda, and friends memorized his work in an effort to preserve it in case it was destroyed or lost. (Her memoirs, Hope Against Hope and Hope Abandoned, later helped to bring Mandelstam a worldwide audience.) He died on December 27, 1938, in the Gulag Archipelago.