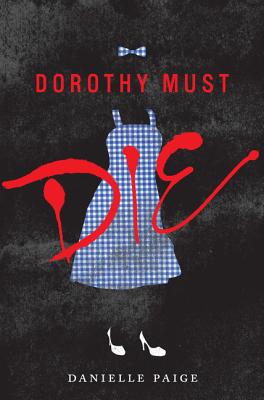 This is book number 1 in the Dorothy Must Die series.

The New York Times bestselling first book in a dark series that reimagines the Oz saga, from debut author Danielle Paige. Start at the beginning and discover your new series to binge!

My name is Amy Gumm—and I'm the other girl from Kansas. I've been recruited by the Revolutionary Order of the Wicked. I've been trained to fight. And I have a mission: Remove the Tin Woodman's heart. Steal the Scarecrow's brain. Take the Lion's courage. And—Dorothy must die.

I didn't ask for any of this. I didn't ask to be some kind of hero. But when your whole life gets swept up by a tornado—taking you with it—you have no choice but to go along, you know?

Sure, I've read the books. I've seen the movies. I know the song about the rainbow and the happy little blue birds. But I never expected Oz to look like this. To be a place where Good Witches can't be trusted, Wicked Witches may just be the good guys, and winged monkeys can be executed for acts of rebellion. There's still a road of yellow brick—but even that's crumbling.

What happened? Dorothy. They say she found a way to come back to Oz. They say she seized power and the power went to her head. And now no one is safe.

Danielle Paige is a graduate of Columbia University and the author of the New York Times bestselling Dorothy Must Die series. Before turning to young adult literature, she worked in the television industry, where she received a Writers Guild of America Award and was nominated for several Daytime Emmys. She currently lives in New York City.

“Readers of Baum’s books will take special delight in seeing new twists on the old characters, and they will greet the surprise climactic turnabout with the smugness of insiders.” — Kirkus Reviews

“Dorothy Must Die is kind of the ultimate in girl-powered literature. You’ve got empowered heroines, sure, but Paige also conjures a formidable villainess in Dorothy and some manipulative lady revolutionaries. Here, women and girls are allowed to be anything. This really is a woman’s world.” — Nerdist.com

“Gone are the days of rainbows, Lollipop Guilds and pretty much anything to sing about in a major key. For those willing to go on a quest with a heroine more attuned to our times than the Dust Bowl era, there’s no place like it.” — USA Today

“Debut author Paige doesn’t hold back in this fast-paced action novel. Give this cinematic upper-YA novel to fans of A. G. Howard’s Splintered, Frank Beddor’s Looking Glass Wars, and TV shows such as Once Upon a Time and Grimm.” — School Library Journal

“[Dorothy Must Die] strikes a similar tone to Marisa Meyer’s Cinder series, with its blend of fantasy, humor, and horror, and it will likely inspire fans of that series to make their way to the Emerald City.” — Bulletin of the Center for Children’s Books

“Paige has spirited readers back to The Wizard of Oz. It’s a classic made more sinister.” — ALA Booklist

“For anyone who likes a good story turned on its head, Dorothy Must Die is a must-read.” — Huffington Post

“The Wizard of Oz as you’ve never seen it.” — Teen Vogue