Fins: Harley Earl, the Rise of General Motors, and the Glory Days of Detroit (Paperback) 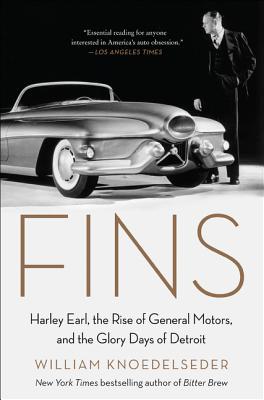 Fins: Harley Earl, the Rise of General Motors, and the Glory Days of Detroit (Paperback)

The New York Times bestselling author of Bitter Brew chronicles the birth and rise to greatness of the American auto industry through the remarkable life of Harley Earl, an eccentric six-foot-five, stuttering visionary who dropped out of college and went on to invent the profession of automobile styling, thereby revolutionized the way cars were made, marketed, and even imagined.

Harleys Earl’s story qualifies as a bona fide American family saga. It began in the Michigan pine forest in the years after the Civil War, traveled across the Great Plains on the wooden wheels of a covered wagon, and eventually settled in a dirt road village named Hollywood, California, where young Harley took the skills he learned working in his father’s carriage shop and applied them to designing sleek, racy-looking automobile bodies for the fast crowd in the burgeoning silent movie business.

As the 1920s roared with the sound of mass manufacturing, Harley returned to Michigan, where, at GM’s invitation, he introduced art into the rigid mechanics of auto-making. Over the next thirty years, he functioned as a kind of combination Steve Jobs and Tom Ford of his time, redefining the form and function of the country’s premier product. His impact was profound. When he retired as GM’s VP of Styling in 1958, Detroit reigned as the manufacturing capitol of the world and General Motors ranked as the most successful company in the history of business.

Knoedelseder tells the story in ways both large and small, weaving the history of the company with the history of Detroit and the Earl family as Fins examines the effect of the automobile on America’s economy, culture, and national psyche.

William Knoedelseder is the New York Times bestselling author of Bitter Brew: The Rise and Fall of Anheuser-Busch and America’s Kings of Beer, as well as the critically acclaimed Stiffed: A True Story of MCA, the Music Business, and the Mafia. His book I’m Dying Up Here: Heartbreak and High Times in
Stand-Up Comedy’s Golden Era is the basis for the Showtime series of the same name. He lives in Los
Angeles, California.

“Fins is a lively study, as big and broad as one of GM’s Buick Roadmasters but as sleek and speedy as one of its Chevrolet Corvettes. It’s essential reading for anyone interested in America’s auto obsession.” — Los Angeles Times

“A rollicking tale about the years when Detroit design dazzled the globe and defined an entire era.” — Detroit News

“A terrific biography...Fins’ should prove a valuable history to have on hand as we enter the age of the autonomous vehicle.” — Wall Street Journal

Fins is far more than a biography of Harley Earl — it’s a fascinating, colorful romp through the glory years of the American automotive industry — The Newswheel