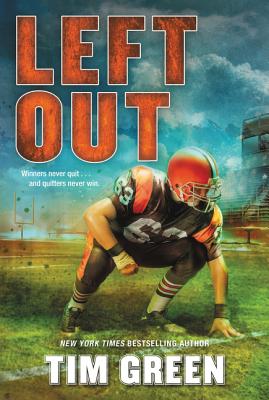 Perfect for fans of Mike Lupica! New York Times bestselling author and former NFL player Tim Green delivers a heartwarming and inspiring story about a deaf boy’s journey to change how others see him—both on and off the football field. Now in paperback.

Landon Dorch wants to be like everyone else. But his deafness and the way he talks have always felt like insurmountable obstacles. But now he finally sees his chance to fit in. Bigger and taller than any other seventh grader in his new school, Landon plans to use his size to his advantage and join the school’s football team. But the same speech problems and the cochlear implants that help him hear continue to haunt him.

Just when it looks like Landon will be left out of football for good, an unlikely friend comes along. But in the end only Landon can fight his way off the bench and through a crowded field of bullies bent on seeing him forever left out.

Tim Green, for many years a star defensive end with the Atlanta Falcons, is a man of many talents. He's the author of such gripping books for adults as the New York Times bestselling The Dark Side of the Game and American Outrage. Tim graduated covaledictorian from Syracuse University and was a first-round draft pick. He later earned his law degree with honors, and he has also worked as an NFL commentator for FOX Sports and NPR.

His first book for young readers, Football Genius, inspired in part by his players and his own kids, became a New York Times bestseller and was followed by Football Hero, Football Champ, The Big Time, and Deep Zone. He drew on his experiences playing and coaching Little League for Rivals and Pinch Hit and two more New York Times bestsellers: Baseball Great and Best of the Best.

Bestselling author Jon Scieszka called Tim Green's Unstoppable, a book about a boy's struggle with cancer that debuted at #2 on the New York Times bestseller list, "Absolutely heroic. And something every guy should read."

Tim Green lives with his wife, Illyssa, and their five children in upstate New York.

“This is a moving story about overcoming bullies and fighting through obstacles.” — Brightly