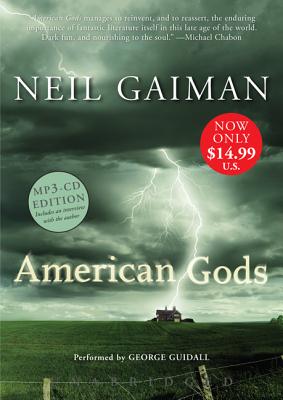 The bestselling author of Neverwhere returns with his biggest, most commercial novel yet—a tour de force of contemporary fiction

A master of inventive fiction, Neil Gaiman delves into the murky depths where reality and imagination meet. Now in American Gods, he works his literary magic to extraordinary results.

Shadow dreamed of nothing but leaving prison and starting a new life. But the day before his release, his wife and best friend are killed in an accident. On the plane home to the funeral, he meets Mr. Wednesday—a beguiling stranger who seems to know everything about him. A trickster and rogue, Mr. Wednesday offers Shadow a job as his bodyguard. With nowhere left to go, Shadow accepts, and soon learns that his role in Mr. Wednesday’s schemes will be far more dangerous and dark than he could have ever imagined. For beneath the placid surface of everyday life a war is being fought —and the prize is the very soul of America.

Neil Gaiman is a #1 New York Times bestselling author of books for children and adults whose award-winning titles include Norse Mythology, American Gods, The Graveyard Book, Good Omens (with Terry Pratchett), Coraline, and The Sandman graphic novels. Neil Gaiman is a Goodwill Ambassador for UNHCR and Professor in the Arts at Bard College.

George Guidall is one of the foremost narrators in the audiobook industry, having recorded over 500 unabridged books ranging from classics to contemporary bestsellers. He is the recipient of the 1999 Audie Award presented by the Audio Publishers Association for the best narration of unabridged fiction.