Gaslighting America: Why We Love It When Trump Lies to Us (Hardcover) 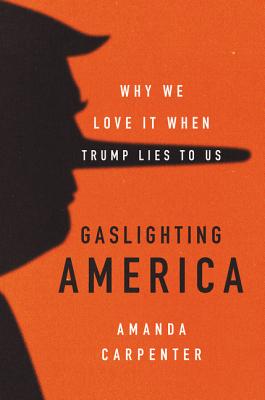 Gaslighting America: Why We Love It When Trump Lies to Us (Hardcover)

"Can you believe what Donald Trump said?"

In Gaslighting America, Carpenter breaks down Trump’s formula, showing why it’s practically foolproof, playing his victims, the media, the Democrats, and the Republican fence-sitters perfectly. She traces how this tactic started with Nixon, gained traction with Bill Clinton, and exploded under Trump. If you think Trump is driving you crazy, it’s because he is. Now, in this urgent book, she explains how to withstand the fire.

Where some people see lies, Trump’s fierce followers see something different. A commitment to winning at all costs; there is nothing he could say that would erode their support at long as it’s in the name of taking down his political enemies.

His opponents on the left and right continue to act as if his fake narratives and conspiracy theories will bring him down, when in fact, they are the ruses that raised him up.

As a conservative former staffer to a competing presidential campaign, Amanda Carpenter witnessed her fellow Republicans fall in line behind Trump. As a political commentator, she was publicly smeared by one of his supporters on live television without a shred of evidence supporting the allegations. Slowly, she watched her entire party succumb to Trump and become defenders of his tactics, and Gaslighting America may be the only hope to bring them back to reality.

AMANDA CARPENTER is a CNN political commentator, writer, and former senior staffer to Senators Jim DeMint and Ted Cruz. She has written for the Washington Post, Townhall.com, Politico, the Washington Times, Refinery29, Cosmo.com, and Human Events.

“A convincing attempt to pinpoint the methods behind Trump’s rise to power… For right-leaning readers aghast at the current state of politics, Carpenter’s book will serve as a beacon of hope.” — Publishers Weekly

“A patriot’s guide to parsing the president’s lies and disinformation.” — Kirkus Reviews

“The word ‘gaslighting’ is not yet in the Oxford English Dictionary (American or British editions) but that may change with Amanda Carpenter’s timely explanation of Donald Trump’s personification of such deviant behavior. Amanda has nicely, and concisely, cataloged Trump’s troubling conduct along with the methods employed with his endless mendacity. By comparison, and of interest to me, she finds Richard Nixon was a mere dabbler in this dark art. Suffice it to say, if you don’t understand gaslighting, you have no idea what Trump is doing—and these are not times to be uninformed. Her warnings are not those of a partisan; rather, this is a principled analysis of another horrific situation accompanying the Trump presidency. Thank you, Amanda, for putting a spotlight on it.” — John W. Dean, Author, Columnist, Commentator, and Former Nixon White House Counsel

“Carpenter, a tough veteran of GOP politics and herself a target of Trump smears, shrewdly analyzes the methods by which this unworthy president and his scummy team insert their malicious fictions into the U.S. media ecosystem.” — David Frum, author Trumpocracy: The Corruption of the American Republic

“We live in dangerous political times, when untruth on all sides seems to prevail over decency. Read Amanda’s book and get armed against the ‘gaslighting’ strategy that’s sure to dominate our politics for years to come.” — Ben Shapiro, editor-in-chief of The Daily Wire and host of The Ben Shapiro Show

“Amanda Carpenter offers a forceful and compelling take on how Trump’s manipulation of the truth, aided by plentiful enablers in media and politics, fueled his political ascension and now maintains it.” — Elise Jordan, political analyst, NBC/MSNBC

“Riveting. I covered the 2016 campaign from the front row, and Carpenter still manages to surprise with her vivid, raw, and bold storytelling. Her hard-hitting analysis pulls no punches and puts a crazy year into sharp perspective.”  — S. E. Cupp, CNN host, author of Losing Our Religion: The Liberal Media’s Attack on Christianity

“The hallmark of a true autocrat is the ability to harness the potency of a lie and use it to alter the citizens’ perception of what is truth. Donald Trump is a master at using the shock value of lies, spin, and disinformation to challenge the very existence of observable reality. Amanda Carpenter’s Gaslighting America: Why We Love It When Trump Lies to Us brilliantly threads the needle to explain how Trump exploits the media and the voters’ emotions to weave his own presidential tapestry through a withering litany of lies. The 2020 election is coming, and in this book, Carpenter shows exactly how Trump will try to deceive, distract, and delude America again.” — Malcolm Nance, Author of The Plot to Hack America: How Putin’s Cyberspies Tried to Steal the 2016 Election and Counterterrorism Analyst for NBC News/MSNBC