On Disobedience: Why Freedom Means Saying "No" to Power (Paperback) 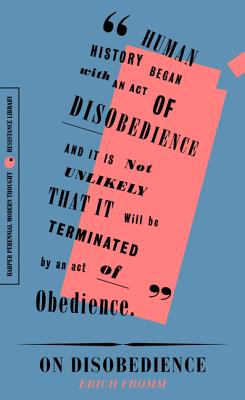 On Disobedience: Why Freedom Means Saying "No" to Power (Paperback)

“Human history began with an act of disobedience, and it is not unlikely that it will be terminated by an act of obedience.”—from On Disobedience

In On Disobedience, Erich Fromm writes that the authoritarian dictatorships of the 20th century produced an “organization man” to follow directives blindly, no matter how abhorrent. At the same time, a kind of conformity has arisen in western democracies, only brought about by more subtle means of massive consumerism. In democracies, where the power to implement irreversible destruction rests in the hands of the few, the individual also needs to retain his ability to dissent and to speak “no” to those in power.

In the face of these conformist pressures in whichever form they take, modern man must seek an authentic expression in order to retain his deepest sense of self. Fromm sees both capitalism and totalitarian communism moving toward a life-denying industrial bureaucracy, and berates the one system for ignoring, the other for betraying, the ideals of a true humanistic socialism in which people take precedence over things, life over property, and work over capital.

As timely today as when it was first published, On Disobedience is a significant work of the 20th century that generations of readers will turn to for inspiration.

In times of crisis, the great works of philosophy help us make sense of the world. The Harper Perennial Resistance Library is a special five-book series highlighting short classic works of independent thought that illuminate the nature of truth, humanity's dangerous attraction to authoritarianism, the influence of media and mass communication, and the philosophy of resistance—all critical in understanding today's politically charged world.

Erich Fromm (1900-1980) emigrated from Germany in 1934 to the United States, where he held a private psychotherapeutic practice and taught at Columbia, Yale, and New York University. His many books include The Art of Loving, Escape from Freedom, Man for Himself, and The Anatomy of Human Destructiveness.