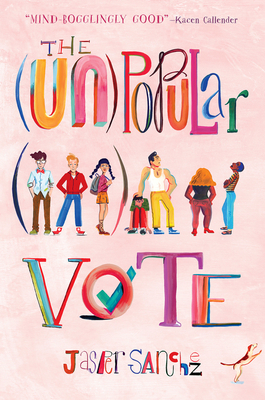 Red, White, & Royal Blue meets The West Wing in Jasper Sanchez’s electric and insightful #ownvoices YA debut, chronicling a transmasculine student’s foray into a no-holds-barred student body president election against the wishes of his politician father.

Optics can make or break an election. Everything Mark knows about politics, he learned from his father, the Congressman who still pretends he has a daughter and not a son.

Mark has promised to keep his past hidden and pretend to be the cis guy everyone assumes he is. But when he sees a manipulatively charming candidate for student body president inflame dangerous rhetoric, Mark risks his low profile to become a political challenger.

The problem? No one really knows Mark. He didn’t grow up in this town, and his few friends are all nerds. Still, thanks to Scandal and The West Wing, they know where to start: from campaign stops to voter polling to a fashion makeover.

Soon Mark feels emboldened to engage with voters—and even start a new romance. But with an investigative journalist digging into his past, a father trying to silence him, and the bully frontrunner standing in his way, Mark will have to decide which matters most: perception or truth, when both are just as dangerous.

“Mind-bogglingly good. This is a novel that every teen needs.” —Kacen Callender, author of Felix Ever After

"Charming, stunning, and unapologetically queer." —Mason Deaver, bestselling author of I Wish You All the Best and The Ghosts We Keep

Jasper Sanchez s a transmasculine author from the heart of Northern California wine country. He earned his BA in anthropology from the University of Pennsylvania and his MA in cinema and media studies from UCLA. He now lives in Seattle with his cat, Simon, who might be more opinionated than he is. When he’s not writing, he can be found wandering museums, scouring the city for the best espresso, and annotating lists of his favorite Star Trek episodes. You can visit him online at www.jaspersanchez.com.

"Refreshingly original, this debut by trans author Sanchez is a thoroughgoing delight that’s not to be missed." — Booklist (starred review)

“Mind-bogglingly good. The narrative takes a smart, careful look at the intersection of identity and politics, and the fight in standing up for friends and ourselves, even against people that we love. I laughed, I cried, I rooted for Mark all the way. With everything that’s happening in the world right now politically, this is a novel that every teen needs.” — Kacen Callender, author of Felix Ever After

"Charming, stunning, and unapologetically queer.” — Mason Deaver, bestselling author of I Wish You All the Best and The Ghosts We Keep

“Heartwarming, inclusive, and intelligent. A recommended purchase for any library, especially those where books by Becky ­Albertalli and Benjamin Alire Sáenz are popular."  — School Library Journal