The Lady Gets Lucky (The Fifth Avenue Rebels #2) (Mass Market) 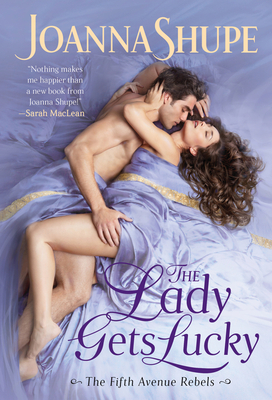 The Lady Gets Lucky (The Fifth Avenue Rebels #2) (Mass Market)

This is book number 2 in the The Fifth Avenue Rebels series.

Following the book called “an alluring blend of love and playfulness” (PW) The Heiress Hunt, beloved author Joanna Shupe continues her new Fifth Avenue Rebels series with a scandalous romance about a good girl desperate to rebel and the rebel desperate to corrupt her.

Shy heiress Alice Lusk is tired of being overlooked by every bachelor. Something has to change, else she’ll be forced to marry a man whose only desire is her fortune. She needs to become a siren, a woman who causes a man’s blood to run hot . . .and she’s just met the perfect rogue to help teach her.

Christopher “Kit” Ward plans to open a not-so-reputable supper club in New York City, and he’s willing to do whatever it takes to hire the best chef in the city to guarantee its success. Even if it requires giving carnal lessons to a serious-minded spinster who has an in with the chef.

Their bedroom instruction grows passionate, and Alice is a much better pupil than Kit had ever anticipated. When the Society gentlemen start to take notice, Kit has to try to win Alice in other ways . . . but is he too late to win her heart?

Joanna Shupe has always loved history, ever since she saw her first Schoolhouse Rock cartoon. In 2013, she won Romance Writers of America's prestigious Golden Heart® Award for Best Historical. Since then, her books have appeared on numerous yearly &#8220best of” lists, including Publishers Weekly, The Washington Post, Kirkus Reviews, Kobo and BookPage. She lives in New Jersey with her two spirited daughters and dashing husband.  >

“Shupe (the Uptown Girls series) opens her Fifth Avenue Rebels series with this effortlessly diverting Gilded Age romance... [Hamilton and Maddie’s] sexual chemistry and dynamic banter, especially during intimate moments, convey an alluring blend of love and playfulness. This character-driven historical romance is sure to delight.”  — Publishers Weekly on The Heiress Hunt

“Nothing makes me happier than a new book from Joanna Shupe!” — Sarah MacLean

“Swoon! With The Rogue of Fifth Avenue, Shupe continues to build on the sterling legacy she’s building for herself as a gifted weaver of glittering Gilded Age tales (complete with lots of nod to real historical figures), while also deepening the contemporary resonance of her themes.”

“A strong finish to an excellent series about strong-willed women determined to live life on their own terms.” — Kirkus Reviews on The Devil of Downtown