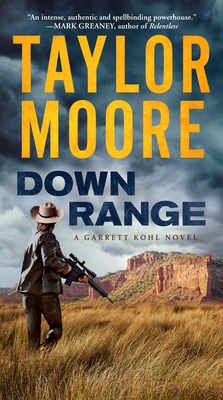 This is book number 1 in the Garrett Kohl series.

“A riveting thriller with a family in crisis at the core. It's my kind of book.” —Brad Taylor, bestselling author of American Traitor

In this action-packed debut thriller for fans of C. J. Box and Jack Carr, DEA agent Garrett Kohl fights to protect his home on the Texas High Plains when a vicious criminal enterprise comes after his family

As a decorated undercover DEA special agent, Garrett Kohl has traveled the world—and fought in most of it—but it’s the High Plains of northwest Texas he calls home and dreams of returning to one day. Kohl is in the middle of an assignment in Afghanistan when his commander orders him back to Texas on a short mission expected to take a week at most. But Kohl is unsettled to discover that he’s moved from one kind of war to another.

The once-peaceful ranching community he loves is under attack by a band of criminals who have infiltrated law enforcement, corrupted local businesses, and are now terrorizing Kohl’s own family. Hoping to prevent bloodshed, Kohl tries to resolve matters peacefully. But when the group strikes first, he has no choice but to go on the attack.

Unfortunately for the criminal crew, besides being an elite undercover officer for the DEA, Garrett Kohl is a battle-hardened Green Beret who spent the better part of his career hunting terrorists. Although outnumbered and outgunned, Kohl knows the wild and forsaken Llano Estacado region of Texas better than anyone. And like so many trespassers before them, these murderers will find out the hard way that the only thing tougher than this land is the people who call it home.

Taylor Moore is the author of Down Range, which was nominated for the Barry Award for Best First Novel, named a Strand Magazine Best Mystery of the year, and selected for the Texas Library Association’s Lariat Reading List. He is a sixth-generation Texan who grew up on a farm and ranch northwest of Houston and is a former CIA Intelligence Officer who worked in both analysis and operations and later consulted for the Department of Defense in Theater Security Cooperation, Force Protection, and Counternarcotics. He now lives in the Texas Panhandle with his wife and two children, where he is a full-time author, screenwriter, and speaker. This is Taylor’s second novel featuring Garrett Kohl.

“Down Range fuses the classic Western with the modern thriller. DEA operator Garrett Kohl has big skills and an even bigger heart that drives him to a pulse-pounding showdown as good as anything you’ll read this year—and maybe ever.” — Mike Maden, author of Tom Clancy’s Firing Point

“Having lived it, Taylor Moore hits every bit of the cost of counterterrorism in Down Range, but this story is much more. It’s a riveting thriller with a family in crisis at the core. It's my kind of book.” — Brad Taylor, New York Times bestselling author of American Traitor

"Taylor Moore's Down Range is an intense, authentic, and spellbinding powerhouse that pulls no punches. With high-octane action as well as genuine Texas lore and bravado, readers will be wanting more from hero Garrett Kohl and author Taylor Moore, and soon!" — Mark Greaney, NYT Bestselling author of Relentless

“A stunning debut, as wild and beautiful as the Texas High Plains in which it’s set, Down Range turns the thriller genre on its head. Stretching from Kabul to Amarillo, Moore’s yarn is chock-full of gripping action, white-knuckled suspense, and, most important, heart.” — Don Bentley, author of Target Acquired

"Combining the suspense and intrigue of a Tom Clancy thriller with the action and grit of a hard-hitting western, Taylor Moore's Down Range is sure to entice fans of both genres, as he weaves a wild tale of betrayal, vengeance, and death on the Texas High Plains."  — Philipp Meyer, New York Times bestselling author of The Son

“A rough neo-Western about family lost and found… A propulsive story of survival... [Kohl’s] slice of Texas is sparse and beautiful, but it’s also deadly… A powerful entry in the reluctant warrior subgenre, in which a dangerous but decent man is pushed past his limits.” — Texas Monthly

“The result is a masterwork of classic storytelling: a man defending his own in the best tradition of a John Wayne or Clint Eastwood film. Think “No Country for Old Men” with Box’s Joe Pickett taking over for Ed Tom Bell. Down Range is downright awesome.” — Providence Journal

“[A] powerful debut… Moore melds the thriller and western genres in Down Range, punctuating frequent action scenes against vivid scenery that adds to the suspense. But he also concentrates on his believable characters…. [Garrett] makes for a forceful hero in “Down Range,” the beginning of what should be a long-running series.” — South Florida Sun Sentinel

“It took me about 25 pages before I got sucked into this exciting thriller featuring Garrett Kohl, a DEA agent who has been working undercover…. This book offers lots of excitement, but also has its funny moments as well.” — The Pilot (Southern Pines, NC)

“[A] strong debut… Things culminate in an exciting, Texas-style showdown between Kohl’s family, cartel sicarios, and a host of other bad actors. Fans of J. Todd Scott and C. J. Box will want to check out this propulsive, character-driven thriller.” — Publishers Weekly

“Delivers both a compelling story and a vivid portrait of the landscape of the High Plains of Texas… Moore has written a tense and irresistible thriller that fans of C. J. Box and the military action novels of Brad Taylor will savor. The chaos mixes well with a stellar panorama.” — Library Journal (starred review)

“A series worth watching”.   — Booklist