How to be a Wallflower: A Would-Be Wallflowers Novel (Large Print / Paperback) 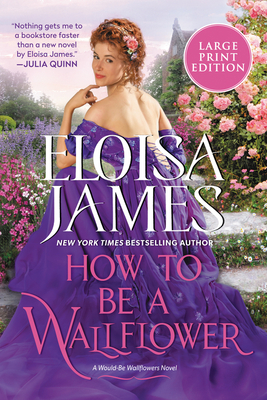 How to be a Wallflower: A Would-Be Wallflowers Novel (Large Print / Paperback)

From New York Times bestseller Eloisa James, a new Regency-set novel in which a heiress with the goal of being a wallflower engages a rugged American in a scorchingly sensual, witty wager that tests whether clothing does indeed make the man—or the wallflower! A perfect companion story to Eloisa's My American Duchess.

Miss Cleopatra Lewis is about to be launched in society by her aristocratic grandfather. But since she has no intention of marrying, she visits a costume emporium specifically to order unflattering dresses guaranteed to put off any prospective suitors.

Powerful and charismatic Jacob Astor Addison is in London, acquiring businesses to add to his theatrical holdings in America—as well as buying an emerald for a young lady back in Boston. He’s furious when a she-devil masquerading as an English lady steals Quimby’s Costume Emporium from under his nose.

Jake strikes a devil’s bargain, offering to design her “wallflower wardrobe” and giving Cleo the chance to design his. Cleo can’t resist the fun of clothing the rough-hewn American in feathers and flowers. And somehow in the middle of their lively competition, Jake becomes her closest friend.

It isn’t until Cleo becomes the toast of all society that Jake realizes she’s stolen his fiercely guarded heart. But unlike the noblemen at her feet, he doesn’t belong in her refined and cultured world.

Caught between the demands of honor and desire, Jake would give up everything to be with the woman he loves—if she’ll have him!

Eloisa James is a USA Today and New York Times bestselling author and professor of English literature, who lives with her family in New York, but can sometimes be found in Paris or Italy. She is the mother of two and, in a particularly delicious irony for a romance writer, is married to a genuine Italian knight. Visit her at www.eloisajames.com.

“Eloisa James writes with a captivating blend of charm, style, and grace that never fails to leave the reader sighing and smiling and falling in love. Her style is exquisite, her prose pure magic. Nothing gets me to a bookstore faster than a new novel by Eloisa James.”  — Julia Quinn

"The romance galaxy is filled with luminous stars, but few twinkle as brightly as James, who, with the launch of her Regency-set Would-Be Wallflowers series, once again dazzles readers with superbly conceived characters, a sublimely sensual love story, and sparkling wit." — Booklist (starred review)

“Another bright, delightful read from a queen of historical romance.” — Kirkus Reviews (starred review) on Say No to the Duke

"James delivers all the banter and sizzle her fans expect in the nuanced fifth Wildes of Lindow Castle Georgian romance...Series readers will be pleased." — Publishers Weekly on Say Yes to the Duke

"A story as wild as the heroine's family name and one that will reward romance fans who want a funny book about an unusual heroine." — Kirkus Reviews on Wilde Child

“A sparkling Georgian romance. James’ writing shines and the Wilde clan’s infectious energy is the epitome of delightful. Overflowing with tried-and-true romance tropes like opposites attract and secret pining, Wilde Child proves that sometimes there’s no need to reinvent the wheel.” — BookPage