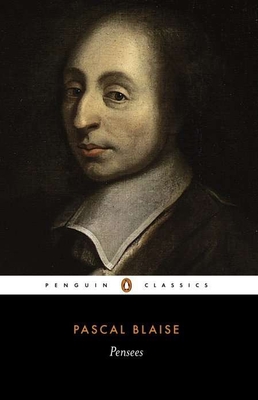 
Not on our shelves. Usually ships in 2-5 days.
Blaise Pascal, the precociously brilliant contemporary of Descartes, was a gifted mathematician and physicist, but it is his unfinished apologia for the Christian religion upon which his reputation now rests. The Penseés is a collection of philosohical fragments, notes and essays in which Pascal explores the contradictions of human nature in pscyhological, social, metaphysical and - above all - theological terms. Mankind emerges from Pascal's analysis as a wretched and desolate creature within an impersonal universe, but who can be transformed through faith in God's grace.

For more than seventy years, Penguin has been the leading publisher of classic literature in the English-speaking world. With more than 1,700 titles, Penguin Classics represents a global bookshelf of the best works throughout history and across genres and disciplines. Readers trust the series to provide authoritative texts enhanced by introductions and notes by distinguished scholars and contemporary authors, as well as up-to-date translations by award-winning translators.
Blaise Pascal was born in Clermont in 1623, the son of a government official. During his short life he left his mark on mathematics, physics, religious controversy and literature. A convert to Jansenism, he engaged with gusto in a controversy with the Jesuits, which gave rise to his Lettres Provincialeson which, with the Pensées, his literary fame chiefly rests. A remarkable stylist, he is regarded by many as the greatest of French prose artists. He died, after a long illness, in 1662.