When China Rules the World: The End of the Western World and the Birth of a New Global Order: Second Edition (Paperback) 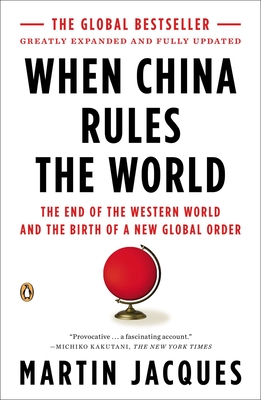 When China Rules the World: The End of the Western World and the Birth of a New Global Order: Second Edition (Paperback)


Not on our shelves. Usually ships in 2-5 days.
Greatly revised and expanded, with a new afterword, this update to Martin Jacques’s global bestseller is an essential guide to understanding a world increasingly shaped by Chinese power

Soon, China will rule the world. But in doing so, it will not become more Western.

Now, in this greatly expanded and fully updated edition, boasting nearly 300 pages of new material, and backed up by the latest statistical data, Martin Jacques renews his assault on conventional thinking about China’s ascendancy, showing how its impact will be as much political and cultural as economic, changing the world as we know it.

First published in 2009 to widespread critical acclaim - and controversy - When China Rules the World: The End of the Western World and the Birth of a New Global Order has sold a quarter of a million copies, been translated into eleven languages, nominated for two major literary awards, and is the subject of an immensely popular TED talk.

Martin Jacques, a political journalist and scholar, is the coeditor and coauthor of The Forward March or Labour Halted?, The Politics of Thatcherism, and New Times. He lives in London.
"Provocative...a fascinating account."—Michiko Kakutani, The New York Times

“A very forcefully written, lively book that is full of provocations and predictions.”—Fareed Zakaria, GPS, CNN


“The West hopes that wealth, globalization and political integration will turn China into a gentle giant… But Jacques says that this is a delusion. Time will not make China more Western; it will make the West, and the world, more Chinese.”—The Economist

“[An] exhaustive­, incisive exploration of possibilities that many people have barely begun to contemplate about a future dominated by China. ... [Jacques] has written a work of considerable erudition, with provocative and often counterintuitive speculations about one of the most important questions facing the world today. And he could hardly have known, when he set out to write it, that events would so accelerate the trends he was analyzing.”—The New York Times Book Review

“The rise of China may well prove to be the defining economic and geopolitical change of our time, and few authors have given the subject deeper thought, nor offered a more illuminating analysis, than Martin Jacques.”—Niall Ferguson, author of The Ascent of Money

“[A] compelling and thought-provoking analysis of global trends.... Jacques is a superb explainer of history and economics, tracing broad trends with insight and skill.”—The Washington Post

“This important book, deeply considered, full of historical understanding and realism, is about more than China. It is about a twenty-first-century world no longer modelled on and shaped by North Atlantic power, ideas and assumptions. I suspect it will be highly influential.”—Eric Hobsbawm, author of The Age of Extremes

“This an extremely impressive book, full of bold but credible predictions … [this] book will long be remembered for its foresight and insight.”—The Guardian (UK)