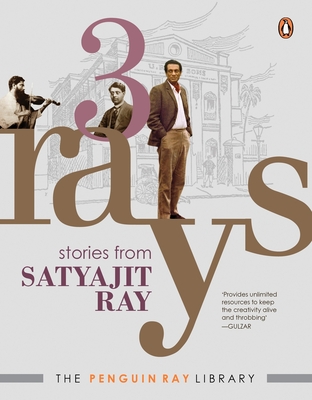 A collector's item, 3 Rays is a source of delight for every reader

Satyajit Ray (1921-1992), through his life, philosophy, and works, offered a unique aesthetic sensibility, which took Indian cinema, art, and literature to a new height. An ace designer, music composer, illustrator, and a gifted writer, Ray gave us the awe-inspiring sleuth Feluda, and the maverick scientist, Professor Shonku—two iconic characters loved and revered by millions of readers.

On the occasion of his centenary birth anniversary, 3 Rays: Stories from Satyajit Ray, the first book in The Penguin Ray Library series, opens a window to the brilliance of this Renaissance man. With more than forty stories and poems along with many unpublished works, autobiographical writings, and illustrations by Ray, this volume offers a unique glimpse into Ray's creative genius.

Satyajit Ray (1921-1992), one of the greatest film-makers of our times, received the Oscar for Lifetime Achievement by the Academy of Motion Picture Arts and Sciences in 1992. In the same year he was honored with the Bharat Ratna. A polymath and a polyglot, Ray was not only an ace designer and but also a brilliant music composer and illustrator. His writings for children, young adults, and adults continue to attract readers across the world.
'3 Rays is like exploring the Mother Earth, and finding the rare treasures' —Gulzar, poet, lyricist, and film-maker

'Satyajit Ray's work is like a beautiful scene from nature, and that's the reason we get lost in his beautiful art' —Shoojit Sircar, film-maker

'Ray's magic, the simple poetry of his images and their emotional impact, will always stay with me' —Martin Scorsese, film director, producer, screenwriter, and actor

'The quiet but deep observation ... have impressed me greatly' —Akira Kurosawa, film-maker