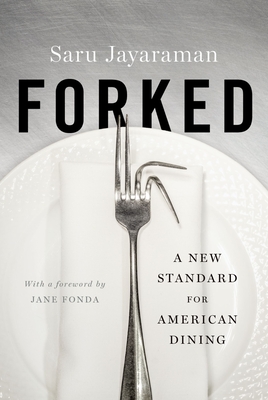 
On Our Shelves Now. Click on title for location specific availability.
From Saru Jayaraman, the book that brought #MeToo to the restaurant industry Restaurants are political environments. You're shoulder-to-shoulder with immigrants. You're at one of the nexuses of income inequality. Your hourly wage is even less than the minimum wage. You're working for tips. You're getting sexually harassed. It was a very galvanizing political experience for
me. -Alexandria Ocasio-Cortez No one has done more to move forward the rights of food and restaurant workers than Saru Jayaraman. This is the story of the next steps in the movement, as told by the woman who is creating them. -Mark Bittman A restaurant critic can tell you about the chef. A menu can tell you about the farm-sourced ingredients. Now who's going to tell you about the people preparing your meal? From James Beard Leadership Award winner Saru Jayaraman, Forked is an enlightening examination of what we don't talk about when we talk about restaurants: Is the server tolerating sexual harassment because tips are her only income? Is the line cook working through a case of stomach flu because he
doesn't get paid sick days? Is the busser not being promoted because he speaks with an accent? As most corporate restaurants continue to set low standards for worker wages and benefits, a new class of chefs and restaurateurs is working to foster sustainability in their food and their employees. Forked offers an insider's view of the highest -- and lowest -- scoring restaurants for worker pay
and benefits in each sector of the restaurant industry, and with it, a new way of thinking about how and where we eat.

Saru Jayaraman is Co-Founder and Co-Director of the Restaurant Opportunities Centers United (ROC United) and a graduate of Yale Law School and the Harvard's Kennedy School of Government. She has been named one of Crain's 40 Under 40, CNN's Ten Visionary Women, New York magazine's Influential ofNew York, and a 2014 White House Champion of Change. Her work has been profiled extensively in the New York Times, and she has appeared on CNN, MSNBC, Bill Moyers Journal, NBC Nightly News, Today, and Real Time with Bill Maher.