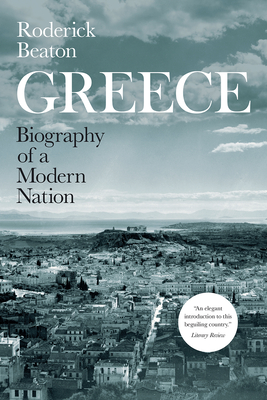 
On Our Shelves Now. Click on title for location specific availability.
For many, “Greece” is synonymous with “ancient Greece,” the civilization that gave us much that defines Western culture today. But, how did Greece come to be so powerfully attached to the legacy of the ancients in the first place and then define an identity for itself that is at once Greek and modern? This book reveals the remarkable achievement, during the last three hundred years, of building a modern nation on the ruins of a vanished civilization—sometimes literally so. This is the story of the Greek nation-state but also, and more fundamentally, of the collective identity that goes with it. It is not only a history of events and high politics; it is also a history of culture, of the arts, of people, and of ideas.

Opening with the birth of the Greek nation-state, which emerged from encounters between Christian Europe and the Ottoman Empire, Roderick Beaton carries his story into the present moment and Greece’s contentious post-recession relationship with the rest of the European Union. Through close examination of how Greeks have understood their shared identity, Beaton reveals a centuries-old tension over the Greek sense of self. How does Greece illuminate the difference between a geographically bounded state and the shared history and culture that make up a nation?

A magisterial look at the development of a national identity through history, Greece: Biography of a Modern Nation is singular in its approach. By treating modern Greece as a biographical subject, a living entity in its own right, Beaton encourages us to take a fresh look at a people and culture long celebrated for their past, even as they strive to build a future as part of the modern West.
Roderick Beaton is Emeritus Koraes Professor of Modern Greek and Byzantine History, Language and Literature at King’s College London and Commander of the Order of Honour of the Hellenic Republic. He is the author or editor of multiple books, including, most recently, Byron’s War: Romantic Rebellion, Greek Revolution.
“Beaton’s sweeping, sympathetic history of modern Greece illustrates the tensions between two kinds of nationalism—and ultimately, between two kinds of freedom. . . . It ought immediately to become the standard history of the modern nation.”

“By treating modern Greece as a biographical subject, a living entity in its own right, Beaton encourages the reader to take a fresh look at the people and culture so celebrated for their past, even as they strive to build a future as part of the modern West.”

2019 Best Books in History
— Financial Times, on the UK Edition

“As Beaton argues in Greece, his splendid new book, ‘Greece and the modern history of the Greek nation matter, far beyond the bounds of the worldwide Greek community.’ . . . Beaton’s biographical conceit keeps the narrative focused, lively, and clear.”
— Wall Street Journal

"Beaton’s 'story of Greece as a modern nation' or rather his 'celebrity biography' of the country is well-written, lavishly illustrated, important, and timely."
— CounterPunch

"The claims of Greek antiquity on European consciousness have always outweighed those of the modern Greek nation. But Beaton argues that Greeks have been pioneers in modern times too, and that the nation's modern contribution to the identity of Europe should be recognized and understood."
— Times Literary Supplement

"Beaton’s history of modern Greece is a scholarly and elegant introduction to this beguiling country. Serious students of history should read it, and no visitor to Greece should leave home without it."
— Literary Review, on the UK edition

“This is a welcome and informative read for scholars, students, and travelers by a master of Greek history and literature, an act of love by an accomplished Philhellene, highly recommended to travelers and other readers.”
— S. Bowman

“The most impressive achievement of Beaton’s book is the way that he captures the full dimensions of Greece’s recent troubles by setting them in the context of the two centuries since the 1821–32 war of national independence. Beaton sheds light on recurrent patterns of political conflict, social change and economic upheaval to which most non-Greek policymakers and commentators during the 2010–18 debt crisis were too busy or—less forgivably—too ignorant to pay attention. . . . Few scholars are better qualified to treat such themes than Beaton, one of the English-speaking world’s leading authorities on modern Greek culture. . . . His new book—judicious, well-researched and commendably up-to-date—deserves to be the standard general history of modern Greece in English for years to come.”
— Financial Times, on the UK Edition

“Beaton makes clear that Greece belongs to the world rather than just itself. And this is why the country still matters, and probably always will.”

— Spectator, on the UK Edition

“The lands, waters, winds, islands, and light of present-day Hellas tell an elemental story that reaches back to pre-historic times.  Beaton’s biography of the modern nation of Greece offers a richly textured, highly readable account of the tumultuous yet fascinating history that took place in this wondrous corner of the world during the past three centuries. One cannot help but be captivated by it.”


— Robert Pogue Harrison, author of Juvenescence: A Cultural History of Our Age