Mind and Life: Discussions with the Dalai Lama on the Nature of Reality (Paperback) 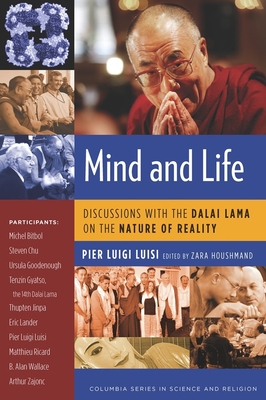 Mind and Life: Discussions with the Dalai Lama on the Nature of Reality (Paperback)

By Pier Luisi, Zara Houshmand (With)


Not on our shelves. Usually ships in 2-5 days.
For over a decade, a small group of scientists and philosophers--members of the Mind and Life Institute--have met regularly to explore the intersection between science and the spirit. At one of these meetings, the themes discussed were both fundamental and profound: can physics, chemistry, and biology explain the mystery of life? How do our philosophical assumptions influence science and the ethics we bring to biotechnology? And how does an ancient spiritual tradition throw new light on these questions? Pier Luigi Luisi not only reproduces this dramatic, cross-cultural dialogue, in which world-class scientists, philosophers, and Buddhist scholars develop a holistic approach to the scientific exploration of reality, but also adds scientific background to their presentations, as well as supplementary discussions with prominent participants and attendees. Interviews with His Holiness the Karmapa, the Buddhist monk Matthieu Ricard, and the actor and longtime human rights advocate Richard Gere take the proceedings into new directions, enriching the material with personal viewpoints and lively conversation about such topics as the origin of matter, the properties of cells, the nature of evolution, the ethics of genetic manipulation, and the question of consciousness and ethics. A keen study of character, Luisi incorporates his own amusing observations into this fascinating dialogue, painting a very human portrait of some of our greatest--and most intimidating--thinkers. Deeply textured and cleverly crafted, Mind and Life is an excellent opportunity for any reader to join in the debate surrounding this cutting-edge field of inquiry.
Pier Luigi Luisi is professor of biology at the University of Roma 3 and the author of The Emergence of Life: From Chemical Origins to Synthetic Biology. His major research has been in the fields of self-organization of chemical systems and the emergence of novel functional properties as a result of increased complexity.