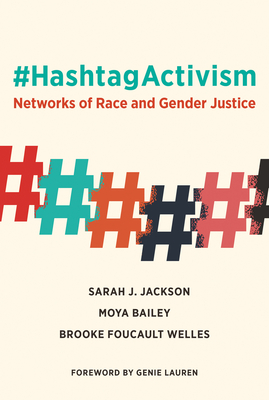 The power of hashtag activism became clear in 2011, when #IranElection served as an organizing tool for Iranians protesting a disputed election and offered a global audience a front-row seat to a nascent revolution. Since then, activists have used a variety of hashtags, including #JusticeForTrayvon, #BlackLivesMatter, #YesAllWomen, and #MeToo to advocate, mobilize, and communicate. In this book, Sarah Jackson, Moya Bailey, and Brooke Foucault Welles explore how and why Twitter has become an important platform for historically disenfranchised populations, including Black Americans, women, and transgender people. They show how marginalized groups, long excluded from elite media spaces, have used Twitter hashtags to advance counternarratives, preempt political spin, and build diverse networks of dissent.

The authors describe how such hashtags as #MeToo, #SurvivorPrivilege, and #WhyIStayed have challenged the conventional understanding of gendered violence; examine the voices and narratives of Black feminism enabled by #FastTailedGirls, #YouOKSis, and #SayHerName; and explore the creation and use of #GirlsLikeUs, a network of transgender women. They investigate the digital signatures of the “new civil rights movement”—the online activism, storytelling, and strategy-building that set the stage for #BlackLivesMatter—and recount the spread of racial justice hashtags after the killing of Michael Brown in Ferguson, Missouri, and other high-profile incidents of killings by police. Finally, they consider hashtag created by allies, including #AllMenCan and #CrimingWhileWhite.
Sarah J. Jackson is Presidential Associate Professor in the Annenberg School for Communication at the University of Pennsylvania.

Moya Bailey is Assistant Professor in the Department of Cultures, Societies, and Global Studies at Northeastern University.

Brooke Foucault Welles is Associate Professor in the Department of Communication Studies at Northeastern University.
“In this well-researched, nuanced text, the authors examine the rise of internet activism as evidenced by movements such as #SayHerName, #MeToo, #BlackLivesMatter and #GirlsLikeUs and their effects on culture, climate and justice.”
—Ms.

“In #HashtagActivism, communication studies professors Sarah J. Jackson and Brooke Foucault-Welles and Cultures, Societies, and Global Studies professor Moya Bailey examine how a series of hashtags, including #GirlsLikeUs, #SayHerName, and #Ferguson, became the epicenters of larger movements for equity.”
—Bitch

“No reading list on American politics in the Age of Trump would be complete without a meaningful examination of social media. #MeToo and #BlackLivesMatter are likely the best known examples of the power of political activism online. But the potency of “hashtag activism” or political organizing via social media emerged years before. It first manifested in dramatic fashion during protests against the Iranian election of 2011. In this ground-breaking and critically well received book, three leading scholars explore the power of counterpublics—outsider or alternative publics that challenge the dominant discourse in the pubic sphere—to shape American politics online.”
—Book Riot

“Compelling, shocking, and inspiring: in documenting how hashtag activism mobilizes, narrates, and legitimates those seeking race and gender justice, this book bears direct testimony to their struggles. Moving and motivating in equal measure it not only extends our understanding, but builds solidarity, too. Read it. Use it. Act on it.”
—Natalie Fenton, Professor of Media and Communications, at Goldsmiths University of London; author of Digital, Political, Radical

“Jackson, Bailey, and Foucault Welles have created a compelling book that simultaneously documents key social justice hashtags over the past decade, explores how these hashtags operate, and produces broader insights about the nature of networked activism for racial and gender justice. This book is a destined to become THE go-to on hashtag activism in general, and Twitter activism in particular.”
—Sasha Costanza-Chock, Associate Professor of Civic Media, MIT; author of Design Justice: Community-Led Practices to Build the Worlds We Need

“#HashtagActivism is a groundbreaking text, offering a detailed, thorough, and nuanced analysis of several of the most prominent episodes of digital activism in recent years. The book combines methodological sophistication and theoretical nuance with the voices and experiences of digital activists themselves. It is essential reading, not just for readers interested in Twitter and politics, but for anyone with an interest in contemporary struggles for justice and equality.”
—David Karpf, Associate Professor, George Washington University