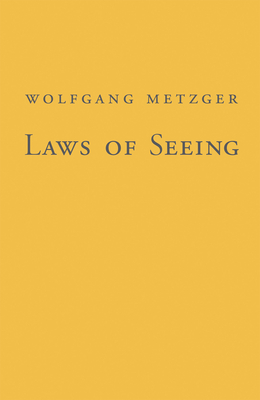 
Special Order - Subject to availability
(This book is nonreturnable. Nonreturnable books may take up to 3 weeks to ship. All sales final.)
The first English translation of a classic work in vision science from 1936 by a leading figure in the Gestalt movement, covering topics that continue to be major issues in vision research today.

This classic work in vision science, written by a leading figure in Germany's Gestalt movement in psychology and first published in 1936, addresses topics that remain of major interest to vision researchers today. Wolfgang Metzger's main argument, drawn from Gestalt theory, is that the objects we perceive in visual experience are not the objects themselves but perceptual effigies of those objects constructed by our brain according to natural rules. Gestalt concepts are currently being increasingly integrated into mainstream neuroscience by researchers proposing network processing beyond the classical receptive field. Metzger's discussion of such topics as ambiguous figures, hidden forms, camouflage, shadows and depth, and three-dimensional representations in paintings will interest anyone working in the field of vision and perception, including psychologists, biologists, neurophysiologists, and researchers in computational vision—and artists, designers, and philosophers.

Each chapter is accompanied by compelling visual demonstrations of the phenomena described; the book includes 194 illustrations, drawn from visual science, art, and everyday experience, that invite readers to verify Metzger's observations for themselves. Today's researchers may find themselves pondering the intriguing question of what effect Metzger's theories might have had on vision research if Laws of Seeing and its treasure trove of perceptual observations had been available to the English-speaking world at the time of its writing.

Wolfgang Metzger (1899-1979) was a central figure in the Gestalt movement within psychology in Germany. He was Director of the Psychological Institute at the University of Münster.

Lothar Spillmann, was for many years Professor in the Brain Research Unit at the University of Freiburg, is Visiting Professor at the Herder Foundation, Bonn, and the China Medical University, Taichung, Taiwan. He edited Wolfgang Metzger's Laws of Seeing (MIT Press, 2005), another classic work from the Gestalt movement.
An excellent book, with a wealth of inspiring demonstrations and insights. The translators must be thanked for making it available to the English-speaking world.—Arni Kristjánson, Perception—