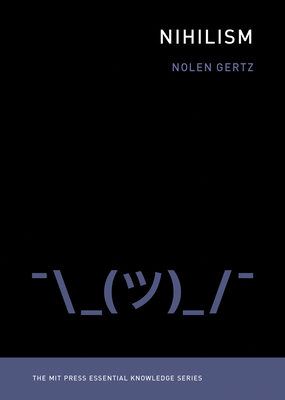 
On Our Shelves Now
An examination of the meaning of meaninglessness: why it matters that nothing matters.

When someone is labeled a nihilist, it's not usually meant as a compliment. Most of us associate nihilism with destructiveness and violence. Nihilism means, literally, “an ideology of nothing. “ Is nihilism, then, believing in nothing? Or is it the belief that life is nothing? Or the belief that the beliefs we have amount to nothing? If we can learn to recognize the many varieties of nihilism, Nolen Gertz writes, then we can learn to distinguish what is meaningful from what is meaningless. In this addition to the MIT Press Essential Knowledge series, Gertz traces the history of nihilism in Western philosophy from Socrates through Hannah Arendt and Jean-Paul Sartre.

Although the term “nihilism” was first used by Friedrich Jacobi to criticize the philosophy of Immanuel Kant, Gertz shows that the concept can illuminate the thinking of Socrates, Descartes, and others. It is Nietzsche, however, who is most associated with nihilism, and Gertz focuses on Nietzsche's thought. Gertz goes on to consider what is not nihilism—pessimism, cynicism, and apathy—and why; he explores theories of nihilism, including those associated with Existentialism and Postmodernism; he considers nihilism as a way of understanding aspects of everyday life, calling on Adorno, Arendt, Marx, and prestige television, among other sources; and he reflects on the future of nihilism. We need to understand nihilism not only from an individual perspective, Gertz tells us, but also from a political one.

Nolen Gertz is Assistant Professor of Applied Philosophy at the University of Twente in the Netherlands.
"Gertz's pithy, persuasive work usefully explains how nihilism can provide motivation for self-inquiry and creativity."
—Publishers Weekly

"This is a wonderful introduction to some pressing questions in philosophy, both political and personal. Those who would like to explore the interplay of Nietzschean ideas, existentialism, and postmodernity in the Western world will enjoy this book."
—CHOICE

"[A]n engaging study that sets out to analyze various conceptions and misconceptions of nihilism. Any such enterprise has to survey the intellectual history of what today has come to be known as nihilism, and this Gertz delivers in almost exemplary fashion....a great starting point for the exploration of nihilism in its many guises."
—Text Matters: A Journal of Literature, Theory and Culture​