A Book on the Making of Lonesome Dove (Southwestern & Mexican Photography Series, The Wittliff Collections at Texas State University) (Hardcover) 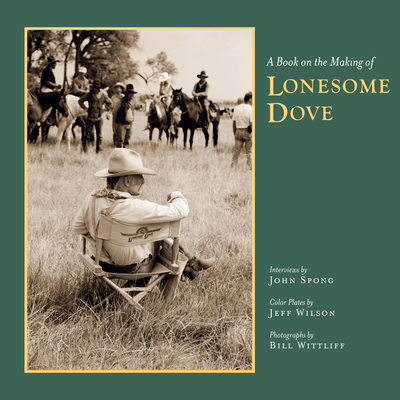 A Book on the Making of Lonesome Dove (Southwestern & Mexican Photography Series, The Wittliff Collections at Texas State University) (Hardcover)

Widely acclaimed as the greatest Western ever made, Lonesome Dove has become a true American epic. Larry McMurtry’s Pulitzer Prize–winning novel was a New York Times best seller, with more than 2.5 million copies currently in print. The Lonesome Dove miniseries has drawn millions of viewers and won numerous awards, including seven Emmys.

A Book on the Making of Lonesome Dove takes you on a fascinating behind-the-scenes journey into the creation of the book, the miniseries, and the world of Lonesome Dove. Writer John Spong talks to forty of the key people involved, including author Larry McMurtry; actors Robert Duvall, Tommy Lee Jones, Anjelica Huston, Diane Lane, Danny Glover, Ricky Schroder, D. B. Sweeney, Frederic Forrest, and Chris Cooper; executive producer and screenwriter Bill Wittliff; executive producer Suzanne de Passe; and director Simon Wincer. They and a host of others tell lively stories about McMurtry’s writing of the epic novel and the process of turning it into the miniseries Lonesome Dove. Accompanying their recollections are photographs of iconic props, costumes, set designs, and shooting scripts. Rounding out the book are continuity Polaroids used during filming and photographs taken on the set by Bill Wittliff, which place you behind the scenes in the middle of the action.

Designed as a companion for A Book of Photographs from Lonesome Dove, Wittliff’s magnificent fine art volume, A Book on the Making of Lonesome Dove is a must-have for every fan of this American epic.

A staff writer at Texas Monthly since 2002, John Spong was nominated for a National Magazine Award in 2010. His stories have been collected in The Best American Sportswriting 2009, Literary Austin, and Rio Grande.

Jeff Wilson is the author of Home Field: Texas High School Football Stadiums from Alice to Zephyr. He has worked as a freelance photographer for media outlets including ESPN, Men’s Journal, Texas Monthly, the New York Times Magazine, Wired, and Houghton Mifflin. His work has appeared in the prestigious American Photography annual and the PDN 2003 photo annual.

Bill Wittliff is a distinguished photographer and writer whose photographs have been published in the books A Book of Photographs from Lonesome Dove, La Vida Brinca, and Vaquero: Genesis of the Texas Cowboy. With his wife, Sally, he founded the highly regarded Encino Press and the Wittliff Collections at Texas State University–San Marcos. As a screenwriter and producer, his credits include Lonesome Dove, The Perfect Storm, The Black Stallion, and Legends of the Fall, among others.

In fact, with A Book on the Making of Lonesome Dove displayed on your coffee table, where it’s designed to be, you risk losing the attention of your company because they’ll be busy admiring your book…The anecdotal and nostalgic atmosphere generated in these pages will thrill anyone familiar with McMurtry’s Lonesome Dove, from the full-fledged Dovey to the casual viewer.
— Texas Books in Review

Whatever your interest—Lonesome Dove or America’s westward expansion and the strong individuals who made it real—this book will lead you to new heights of entertainment and appreciation. A Book on the Making of Lonesome Dove captures the breathlessness of the novel and the miniseries.
— Great Plains Research