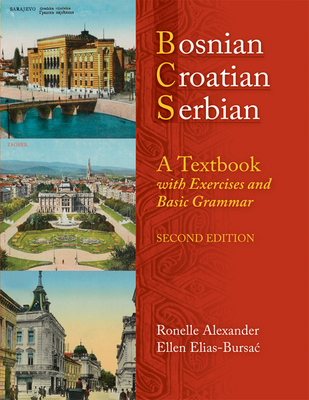 
Not on our shelves. Usually ships in 2-5 days.
Three official languages have emerged in the Balkan region that was formerly Yugoslavia: Croatian in Croatia, Serbian in Serbia, and both of these languages plus Bosnian in Bosnia-Herzegovina. Bosnian, Croatian, Serbian, a Textbook introduces the student to all three. Dialogues and exercises are presented in each language, shown side by side for easy comparison; in addition, Serbian is rendered in both its Latin and its Cyrillic spellings. Teachers may choose a single language to use in the classroom, or they may familiarize students with all three. This popular textbook is now revised and updated with current maps, discussion of a Montenegrin language, advice for self-study learners, an expanded glossary, and an appendix of verb types. It also features:

•    All dialogues, exercises, and homework assignments available in Bosnian, Croatian, and Serbian
•    Classroom exercises designed for both small-group and full-class work, allowing for maximum oral participation
•    Reading selections written by Bosnian, Croatian, and Serbian authors especially for this book
•    Vocabulary lists for each individual section and full glossaries at the end of the book
•    A short animated film, on an accompanying DVD, for use with chapter 15
•    Brief grammar explanations after each dialogue, with a cross-reference to more detailed grammar chapters in the companion book, Bosnian, Croatian, Serbian, a Grammar.
Ronelle Alexander is professor of Slavic languages and literatures at the University of California, Berkeley. She is author of the two-volume Intensive Bulgarian: A Textbook and Reference Grammar. Ellen Elias-Bursac is a language teacher and a literary translator. She taught BCS for ten years at Harvard University’s Department of Slavic Languages and Literatures and now lives in Europe.
“This textbook is the most grammatically and culturally accurate of any BCS materials available. It is the best adapted to the diverse needs of my students, who often combine Croatian heritage, Bosnian contacts, and Serbian preoccupations in the same classroom.”—Wayles Browne, Cornell University