Sleep of Memory: A Novel (The Margellos World Republic of Letters) (Hardcover) 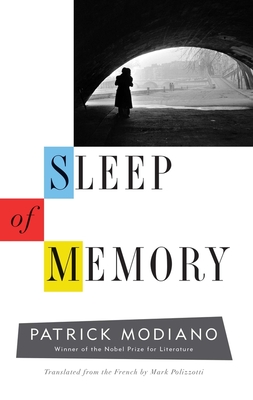 Sleep of Memory: A Novel (The Margellos World Republic of Letters) (Hardcover)

Not on our shelves. Out of Print.
The newest best-seller by Patrick Modiano is a beautiful tapestry that brings together memory, esoteric encounters, and fragmented sensations

Patrick Modiano’s first novel since his 2014 Nobel Prize revisits moments of the author’s past to produce a spare yet moving reflection on the destructive underside of love, the dreams and follies of youth, the vagaries of memory, and the melancholy of loss. Writing from the perspective of an older man, the narrator relives a key period in his life through his relationships with several enigmatic women—Geneviève, Martine, Madeleine, a certain Madame Huberson—in the process unearthing his troubled relationship with his parents, his unorthodox childhood, and the unsettled years of his youth that helped form the celebrated writer he would become. This is
classic Modiano, utilizing his signature mix of autobiography and invention to create his most intriguing and intimate book yet.
Internationally renowned author Patrick Modiano has received many prestigious literary awards, among them the 2014 Nobel Prize for Literature. Mark Polizzotti is the translator of more than fifty books from the French, including eight by Modiano.
“Memories from some fifty years before return . . . blurring the lines between reality, dreams, and fiction. These are dark, at times violent recollections . . . but [the narrator] maintains a wry wistfulness about the comings and goings of a long life.”—New Yorker

“Sleep of Memory is a throwback to a Paris where life still happened on the terrasses, before everyone retreated into laptops and phones and before time was money, when some happenstance meeting in the morning might turn into an afternoon with an unknown ending.” —Elisabeth Zerofsky, International New York Times

“Once again, Modiano masterfully demonstrates the ‘art of memory’ that won him the Nobel and accounts for the engrossing charm of all his work.”—Nelly Kaprièlian, Vogue (France)

“An elegant work of suggestion and misdirection”—Kirkus Reviews

“A classic Modiano novel from its very first scene . . . A startlingly beautiful excavation of his classic themes . . . For fans and newcomers alike, this is Modiano at his very best.”—Publishers Weekly (starred review)

“Intimate and important . . . Modiano’s most personal and revelatory book.”—Mary Whipple, Seeing the World Through Books (blog)

“[A] brief, poignant volume . . . [with] a mood ably conveyed by the sensitive and spare translation of Mark Polizzotti . . . It has some of the best aphorisms one can find in Modiano. . . . Sleep of Memory manages to attach a feeling not just of unease but of genuine terror to the past.”—Thomas J. Millay, Los Angeles Review of Books

“Though foreign in every sense of the word, Sleep of Memory beautifully captures the universally ambiguous sensation of recalling a distant memory. This account is for anyone who wonders ‘whether they belonged to reality or the realm of dreams.’"—Zoe Peterson, Minneapolis Star Tribune

“Modiano’s signature voice evokes people and place masterfully, stirring readers to reflect on their own experiences and relationships.”—World Literature Today

“Brief but vast and echoing, impossible to summarize, Sleep of Memory is Modiano at his most sublime.”—Luc Sante, author of The Other Paris

"It’s thrilling to read Modiano’s narratives of a cosmic mystery so substantive, yet so personal, that it need not be named.  Though names do appear everywhere, lit up like stars above a dark landscape, mapping locations, naming the players (often with fluid identities) in a shape shifting, yet eternal drama.  In Modiano, mysteries don’t exist to be solved; instead, they are compounded.  I love the metaphorical connotations here of people one might assume have vanished, though 'they only changed neighborhoods.'"—Ann Beattie

"A lapidary master, Modiano compellingly evokes a particular city (Paris) in a historical moment, through the recollections of his idiosyncratic protagonist. Simultaneously illusory and utterly precise, Sleep of Memory reverberates powerfully in the reader's imagination."—Claire Messud, author, most recently, of The Burning Girl