The Life and Legend of the Sultan Saladin (Hardcover) 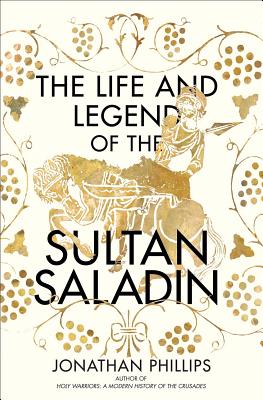 The Life and Legend of the Sultan Saladin (Hardcover)

In 1187, Saladin marched triumphantly into Jerusalem, ending decades of struggle against the Christians and reclaiming the holy city for Islam. Four years later he fought off the armies of the Third Crusade, which were commanded by Europe’s leading monarchs. A fierce warrior and savvy diplomat, Saladin’s unparalleled courtesy, justice, generosity, and mercy were revered by both his fellow Muslims and his Christian rivals such as Richard the Lionheart.

Combining thorough research with vivid storytelling, Jonathan Phillips offers a fresh and captivating look at the triumphs, failures, and contradictions of one of the Crusades’ most unique figures. Bringing the vibrant world of the twelfth century to life, this book also explores Saladin’s complicated legacy, examining the ways Saladin has been invoked in the modern age by Arab and Muslim leaders ranging from Nasser in Egypt, Asad in Syria, and Saddam Hussein in Iraq to Osama bin Laden, as well as his huge appeal across popular culture in books, drama, and music.
Jonathan Phillips is professor of the history of the Crusades at Royal Holloway, University of London. He is the author of Holy Warriors: A Modern History of the Crusades and The Second Crusade. He lives in Surrey.
“Mr. Phillips has fruitfully extended the range of Arabic source material to create a rounded portrait of Saladin’s world, often sketched in sharp, unexpected detail . . . [He] draws in the reader with vivid accounts of people, places and events, relying on apt quotation from primary sources of scenic descriptions and direct speech . . . Saladin’s was a truly astonishing career, one to which Mr. Phillips does justice.”—Wall Street Journal

Winner of the Best First Biography Prize, sponsored by Slightly Foxed and The Biographers' Club

“Outstanding. Jonathan Phillips has written a compelling account of arguably the most inspirational of Islamic military heroes.”—Christopher de Bellaigue, author of The Islamic Enlightenment

“An authoritative and brilliantly told account of the life of one of the world's greatest—and most famous—military leaders. Jonathan Phillips leaves no stone unturned in this impressive and lively history of the genius who was Saladin.”—Peter Frankopan, author of The Silk Roads: A New History of the World and The New Silk Roads: The Present and Future of the World

“Vivid and authoritative, with glistening details on every page. Phillips explains Saladin’s ability to mesmerize not just through the achievements of his lifetime but through his inspiration of Arab leaders, including Nasser, Assad, and Saddam Hussein, ever since.”—James Barr, author of Lords of the Desert: The Battle between the United States and Great Britain for Supremacy in the Middle East

“This balanced, illuminating, and fascinating biography of Saladin could not be more timely. Today political figures often inspire little admiration, but Saladin's career at the height of the crusades reminds us that moral charisma and integrity can be recognized and honored by people on both sides of a vicious conflict.  Jonathan Phillips's account is balanced and fair; he does not present the great Kurdish sultan as a paragon but Saladin's remarkable career should challenge the widespread Western perception of Islam as an atavistically violent faith. Phillips  reminds us that Saladin took Jerusalem from the Christians in 1187 with a clemency and forbearance that was in sharp contrast with the hideous bloodshed of the Crusaders' conquest of the Holy City in 1099. His concluding account of the intense emotion that the memory of Saladin still inspires in the Middle East today reveals the sensitivity and pain that underlies so many of the region's unresolved problems.”—Karen Armstrong, author of A History of God: The 4,000-Year Quest of Judaism, Christianity, and Islam

“This breathtaking biography of the Ayyubid conqueror Saladin exceeds all others both in its erudition and in its brilliant analysis of Saladin’s modern representations in the political mobilization of Islam.”—William Chester Jordan, author of The Apple of His Eye:  Converts from Islam in the Reign of Louis IX