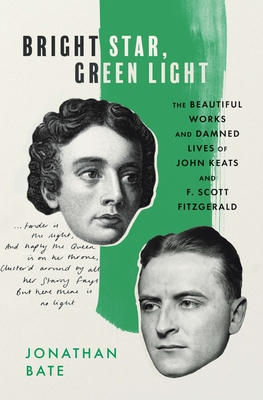 Not only was Fitzgerald profoundly influenced by Keats, titling Tender Is the Night and other works from the poet’s lines, but the two shared similar fates: both died young, loved to drink, were plagued by tuberculosis, were haunted by their first love, and wrote into a new decade of release, experimentation, and decadence. Both were outsiders and Romantics, longing for the past as they sped blazingly into the future.

Using Plutarch’s ancient model of “parallel lives,” Bate recasts the inspired lives of two of the greatest and best-known Romantic writers. Commemorating both the bicentenary of Keats’s death and the centenary of the Roaring Twenties, this is a moving exploration of literary influence.
Jonathan Bate is Foundation Professor of Environmental Humanities at Arizona State University and a senior research fellow at Oxford University, where he was formerly provost of Worcester College.
“What a pleasure these days to come across a book that unabashedly, cheerfully celebrates the lasting power of literature.”—Christoph Irmscher, Wall Street Journal

“The importance of Keats to Fitzgerald has long been recognized, but counterpointing the two men’s writing lives and ambitions, as Bate does here, throws fresh light on both men.”—John Barnard, University of Leeds

“Keats was Fitzgerald’s guiding star. . . . An energetic and highly engaging game of literary ping-pong across the ages. Life, writing and inspiration are served and returned in a rapid rally of ideas. . . . What an immensely charismatic pair they are. . . . Go now, read this book.’”—Laura Freeman, The Times

“A daring, dizzying attempt to connect Keats and F. Scott Fitzgerald has plenty to take pleasure in. . . . Bate, whose recent biography of Wordsworth I admired, is at his best when he zeroes in on the work: his feeling for it, by being so exacting, is infectious, especially in the case of Keats. . . . In the end, the principal achievement of this pairing is to remind us of the way that literature connects us.”—Rachel Cooke, The Guardian

“An excellent introduction to each writer . . . [that] illuminates both.”—Rowan Williams, New Statesman