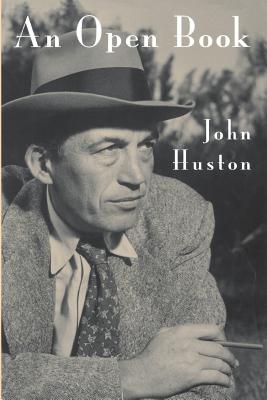 
Not on our shelves. Usually ships in 2-5 days.
"Far superior to the endless run of books by and about movie people, Mr. Huston shows a master screenwriter's skill in setting a scene and delineating a character with a few words."--New York Times Book Review

In An Open Book, this veteran of five marriages, innumerable friendships, practical jokes, horses, love affairs, and intellectual obsessions tells his own story in his own way. It is direct, unadorned, complete-and wonderful reading. Here is Huston on stage for the first time at age three, dressed in an Uncle Sam suit; in the ring at eighteen, boxing for small purses; selling his first short story to H.L. Mencken; down and out in London; acting in Greenwich Village; going to Hollywood to work for Jack Warner as a writer; directing his first picture, The Maltese Falcon; filming dangerous combat scenes in the Aleutians and in Italy; and making over forty years worth of movies, from Key Largo to The Man Who Would Be King. And the stories behind those movies are often as exciting as the movies themselves, featuring such notables as Hemingway, Selznick, Sartre, Hepburn, Monroe, Flynn, Welles, Gable, Bogart, Clift, and Brando. An Open Book is alive with John Huston's presence: his boldness and daring, his candor and style, and the spontaneity with which he followed his dreams to their ultimate destination, the well-deserved acclaim of a world enchanted by his work.
John Huston (1906-1987) directed 41 films, including The Red Badge of Courage, The African Queen, Treasure of the Sierra Madre, and Prizzi's Honor, and acted in some twenty others. One of the most admired, colorful, and adventurous personalities of American movies, he has been the subject of many books and stories, only some of them true.