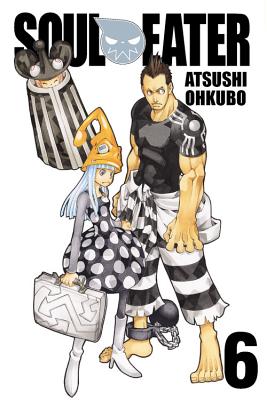 By Atsushi Ohkubo (Created by)

This is book number 6 in the Soul Eater series.

Death the Kid and Black*Star race after Free and Eruka, ready to do
whatever it takes to stop the Black Blood before it is used to revive
the slumbering First Kishin. Meanwhile, Maka has allowed herself to slip
into madness in an effort to reach Crona's troubled soul. In addition
to being horribly embarrassing, her actions carry a great risk. If Maka
can't find Crona fast, she too will be consumed by madness!
Atsushi Ohkubo's debut manga series, B.ICHI, originally appeared in Square Enix's MONTHLY SHONEN GANGAN magazine. Upon completion of the series, his concept for SOUL EATER began as a series of shorts appearing in the same magazine and later became the long-running work that has earned him international renown. In 2011, he began working on a prequel series entitled SOUL EATER NOT!