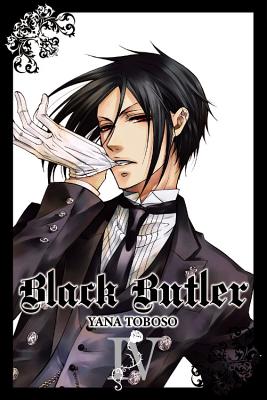 By Yana Toboso (Created by)

This is book number 4 in the Black Butler series.

London - the capital of the Great Empire - is once again under siege,
as a string of bizarre attacks on British citizens returned from India
sends rumours flying and casts a pall upon Queen Victoria's rule. Sent
in by Her Majesty, young Earl Phantomhive and his most capable butler,
Sebastian, follow a trail that collides head-on with an Indian youth
who claims to be a prince. And this prince possesses an extraordinary
butler of his own! As an intense rivalry between the two butlers begins
to form, will the kitchen be the dueling duo's final battleground?!
Yana Toboso is the creator of the wildly popular series BLACK BUTLER which is currently serialized in Square Enix's magazine MONTHLY GFantasy. Her previous work was a single volume entitled RUST BLASTER.