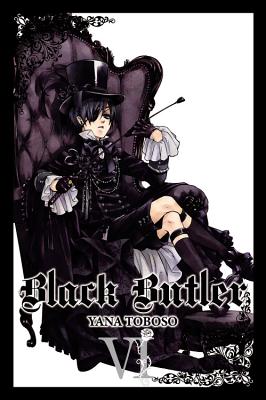 By Yana Toboso (Created by)

This is book number 6 in the Black Butler series.

The cheer of the holidays has passed, but the Noah's Ark traveling
circus has been making the rounds, bringing fun and joy to children of
all ages. However, as the ringmaster's cries fade away, a disturbing
trend begins to surface in the wake of the colourful entourage. Children
seem to disappear whenever the circus packs up for its next
destination, and there are no clues...or corpses...to be found. But when the
situation calls for Ciel and Sebastian to infiltrate the big top, will
Sebastian's inhuman skills be enough to see him and his young master
through a treacherous tightrope act that may well end in death?
Yana Toboso is the creator of the wildly popular series BLACK BUTLER which is currently serialized in Square Enix's magazine MONTHLY GFantasy. Her previous work was a single volume entitled RUST BLASTER.