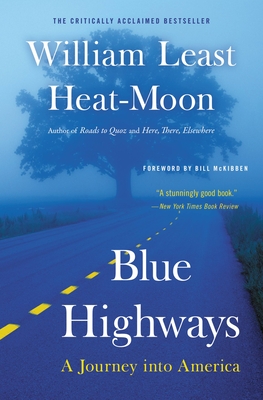 
On Our Shelves Now. Click on title for location specific availability.
Hailed as a masterpiece of American travel writing, Blue Highways is an unforgettable journey along our nation's backroads.
William Least Heat-Moon set out with little more than the need to put home behind him and a sense of curiosity about "those little towns that get on the map -- if they get on at all -- only because some cartographer has a blank space to fill: Remote, Oregon; Simplicity, Virginia; New Freedom, Pennsylvania; New Hope, Tennessee; Why, Arizona; Whynot, Mississippi."
His adventures, his discoveries, and his recollections of the extraordinary people he encountered along the way amount to a revelation of the true American experience.
William Least Heat-Moon is the author of the bestselling classics Roads to Quoz, Blue Highways, River Horse, and PrairyEarth. He lives in Columbia, Missouri.