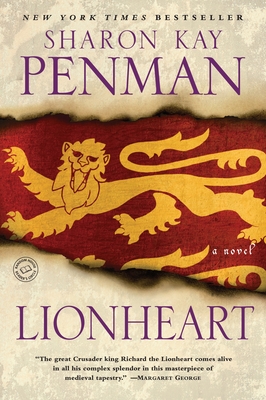 
Not on our shelves. Usually ships in 2-5 days.
NEW YORK TIMES BESTSELLER

“The great Crusader king Richard the Lionheart comes alive in all his complex splendor in this masterpiece of medieval tapestry.”—Margaret George

A.D. 1189. After the death of his father, Henry II, and the early demise of two of his brothers, Richard is crowned King of England and immediately sets off for the Holy Land. This is the Third Crusade, marked by internecine warfare among the Christians and extraordinary campaigns against the Saracens. Richard’s surviving brother, the younger John, is left behind—and conspires with the French king to steal his brother’s throne. Only their mother, Eleanor of Aquitaine, now freed from decades of captivity, remains to protect Richard’s interests and secure his destiny.

In this engrossing saga, Sharon Kay Penman delivers a novel of passion, intrigue, battle, and deceit. Lionheart is a sweeping tale of a heroic figure—feared by his enemies and beloved by those he commanded—who became a legend in his own lifetime.

“[Sharon Kay] Penman displays her usual grasp of sweeping historical events as well as an uncanny ability to get inside the hearts and minds of her real-life characters. Her reputation for character-driven, solidly detailed historicals is richly deserved.”—Booklist

Don’t miss the exclusive conversation between Sharon Kay Penman and Margaret George at the back of the book.
Sharon Kay Penman is the author of seven previous historical novels: When Christ and His Saints Slept, Time and Chance, Devil’s Brood, and four medieval mysteries set during the reign of Eleanor of Aquitaine. She lives in Mays Landing, New Jersey, and is working on A King’s Ransom, which will complete the story of Richard I.