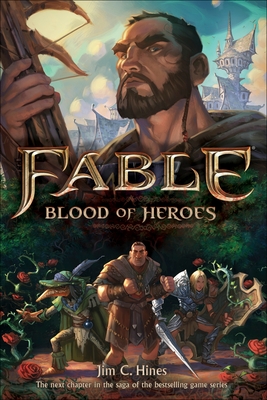 The official companion novel to the videogame Fable® Legends

Deep in Albion’s darkest age, long before once upon a time . . . Heroes are thought to be gone from the land. So why have the bards begun singing of them once more? For Fable newcomers and dedicated fans alike, Blood of Heroes delves into a never-before-glimpsed era, telling the tale of a band of adventurers who come together to defend a kingdom in desperate need.

The city of Brightlodge is awash with Heroes from every corner of Albion, all eager for their next quest. When someone tries to burn down the Cock and Bard inn, four Heroes find themselves hastily thrown together, chasing outlaws through sewers, storming a riverboat full of smugglers, and placing their trust in a most unlikely ally. As the beginnings of a deadly plot are revealed, it becomes clear that Heroes have truly arrived—and so have villains.

What connects the recent events in Brightlodge to rumors about a malicious ghost and a spate of unsolved deaths in the nearby mining town of Grayrock? Unless Albion’s bravest Heroes can find the answer, the dawn of a new age could be extinguished before it even begins.

Jim C. Hines made his professional debut in 1998 with “Blade of the Bunny,” an award-winning story that appeared in Writers of the Future XV. Since then, his short fiction has been featured in more than fifty magazines and anthologies. He’s written ten books, including Libriomancer, The Stepsister Scheme, and the humorous Goblin Quest series. He promises that no chickens were harmed in the making of this book.