Just Passing Through: A Seven-Decade Roman Holiday: The Diaries and Photographs of Milton Gendel (Hardcover) 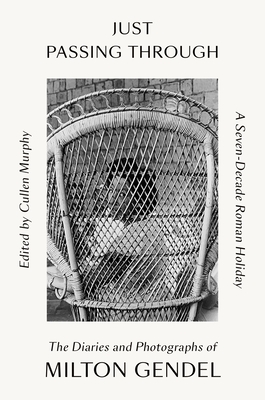 Just Passing Through: A Seven-Decade Roman Holiday: The Diaries and Photographs of Milton Gendel (Hardcover)

“Milton Gendel had the good fortune to live a wildly entertaining life in Rome—a charmed, romantic period he captured in diaries and photos. Milton had the further good fortune to have Cullen Murphy bring this vanished dolce vita to life.” —Graydon Carter, coeditor of Air Mail

A never-before-seen treasure trove of photos and diary entries from the celebrated photographer Milton Gendel that bring Rome’s midcentury heyday to life.

“I’m just passing through,” Milton Gendel liked to say whenever anybody asked him what he was doing in Rome. Even after seven decades in the Eternal City, from his arrival as a Fulbright Scholar in 1949 until his death in 2018 at the age of ninety-nine, he refused to be pigeonholed. He was always an American—never an “expat,” never an émigré—but he couldn’t leave, so deep were his ties, and this dual bond left an indelible imprint on his life and art.

Born in New York City to Russian immigrants, Gendel first made his way to Meyer Schapiro’s classroom at Columbia University and then to Greenwich Village, where he and his friend Robert Motherwell joined the circle of surrealists around Peggy Guggenheim and André Breton. But it was Rome that earned his enduring fascination—the city supplied him with endless outlets for his curiosity, a series of dazzling apartments in palazzi, the great loves of his life, and the scores of friendships that made his story inextricably part of the city’s own.

Gendel did much more than just pass through, instead becoming one of Rome’s foremost documentarians. He spoke Italian fluently, worked for the industrialist Adriano Olivetti, and sampled the latest currents of Italian art as a correspondent for ARTnews. And he was an artist in his own right, capturing the lives of Sicilian peasants and British royals alike on film and showing his photographs at the Roman outpost of the Marlborough Gallery. Then there were his diaries, a casement window thrown open onto a who’s who of artists, writers, and socialites sojourning in the city that remained, for Gendel, the Caput Mundi: Mark Rothko, Princess Margaret, Alexander Calder, Anaïs Nin, Gore Vidal, Martha Gellhorn, Muriel Spark. His longtime home on the Isola Tiberina was the nerve center of the dolce vita generation, whose comings and goings and doings he immortalized in both words and images.

Here, for the first time in print, are Gendel’s diaries, together with his photographs, selected and edited by Cullen Murphy. Just Passing Through brings together the most striking artifacts of one of the past century’s richest and most expansive lives, salted with wit and insight into the figures who defined an era.

Milton Gendel (1918–2018) was an American photographer and art critic who lived and worked in Rome. He studied at Columbia University and served in the U.S. Army in China before winning a Fulbright Scholarship and moving to Italy, where he worked as a correspondent for ARTnews. His photographs have been shown in numerous galleries in Italy and elsewhere abroad.

Cullen Murphy is an editor at large at The Atlantic, where he was the longtime managing editor, and he has also been an editor at large at Vanity Fair. He is the author of Cartoon County: My Father and His Friends in the Golden Age of Make-Believe (FSG, 2017) and is at work on a book on the fountains of Rome.

"Elegantly edited . . . Gendel seems to have fixed everyone and everything with the same ennobling, tender eye." —Alexandra Jacobs, The New York Times

"[A] rich sample of Gendel’s delectable diary and his careful, evocative pictures of his family, friends and adopted city . . . Gendel’s photographs are given equal billing with his prose . . . the best of his portraits of his children and friends evoke some of the candour of Cartier-Bresson." —Max Norman, Apollo Magazine

"Gendel is a sharp witness to the doings of the bourgeois bohemians of Rome, a city in which he spent seventy years as an expat . . . Here is a diverting book that can be dipped into continuously." —Benjamin Riley, The New Criterion

"Abundantly illustrated with the late photographer Gendel’s images, these diary entries show off his fabulously wealthy and cultured milieu . . . An intimate series of snapshots and vignettes of [. . .] gilded 1970s-era Rome . . . Those who know the art world will delight in these fresh and often funny notes on some of the 20th century’s most well-known cultural figures." —Publishers Weekly

"A rich portrait of an alluring character with an enviable talent for living." —Kirkus Reviews

"Milton Gendel had the good fortune to have lived a wildly-entertaining life in Rome—a charmed, romantic period he captured in diaries and photos. Milton had the further good fortune to have Cullen Murphy bring this vanished dolce vita to life." —Graydon Carter, coeditor of Air Mail

"I love these diaries. Milton Gendel was the perfect guide to the times in which he lived for nearly 100 years. He was an insider, but an outsider observing—and he was lucky to know writers, artists and society figures in London and Rome. From his perceptive analysis of Gore Vidal to his take on Princess Margaret and Lord Snowdon, I was gripped from the first page." —Hugo Vickers, author of The Quest for Queen Mary

"Milton Gendel was the soul of Rome, and for decades all roads truly did lead to him. He never stopped amazing us with his wit, his knowledge, and his social life (ranging from the local trattoria to Buckingham Palace, with people like Evelyn Waugh tossed in the mix). To fill the void left by his death in 2018, we have the surprise of this gorgeous book. What a gift he left with his diaries and photographs. As someone said to us all those years ago: 'You don’t know Milton Gendel? You must meet him.'" —John Guare, playwright, and Adele Chatfield-Taylor, former president and CEO of the American Academy in Rome