The People's Tycoon: Henry Ford and the American Century (Paperback) 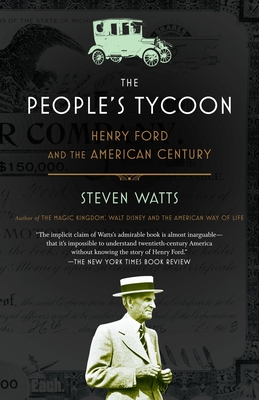 The People's Tycoon: Henry Ford and the American Century (Paperback)


On Our Shelves Now. Click on title for location specific availability.
How a Michigan farm boy became the richest man in America is a classic, almost mythic tale, but never before has Henry Ford’s outsized genius been brought to life so vividly as it is in this engaging and superbly researched biography. The real Henry Ford was a tangle of contradictions. He set off the consumer revolution by producing a car affordable to the masses, all the while lamenting the moral toll exacted by consumerism. He believed in giving his workers a living wage, though he was entirely opposed to union labor. He had a warm and loving relationship with his wife, but sired a son with another woman. A rabid anti-Semite, he nonetheless embraced African American workers in the era of Jim Crow. Uncovering the man behind the myth, situating his achievements and their attendant controversies firmly within the context of early twentieth-century America, Watts has given us a comprehensive, illuminating, and fascinating biography of one of America’s first mass-culture celebrities.

Steven Watts is a historian and writer who has charted the sweeping evolution of American culture in a number of highly-praised books. His series of biographies of major figures—Henry Ford, Dale Carnegie, Walt Disney, Hugh Hefner—has explored the shaping of a modern value-system devoted to consumerism, self-fulfillment, leisure, and personality. Two earlier books on the Early Republic era examined the shift from an older society of republican virtue to a 19th-century Victorian era devoted to self-control, individual character, and the self-made man.

Watts’ books have led to involvement in a number of media projects, including several films for PBS, the History Channel, and documentary venues in Germany and Brazil. He also has appeared in a variety of programs on CBS, NBC, CNBC, NPR, Fox, Fox News, C-Span, Bloomberg News, MSNBC, BBC, and Irish National Radio. He is currently a professor of history at the University of Missouri.

“The implicit claim of Watts’s admirable book is almost inarguable–that it’s impossible to understand 20th-century America without knowing the story of Henry Ford.” –The New York Times“Ford has had many biographers. . . . None, however, comes close to Steven Watts. . . . He brilliantly reveals the nature of Ford’s genius.” –Chicago Tribune“Steven Watts attempts the most integrated understanding to date of Ford’s enormous influence and varied appeal. . . . The fascinating result may change the way Henry Ford is remembered.” –San Francisco Chronicle