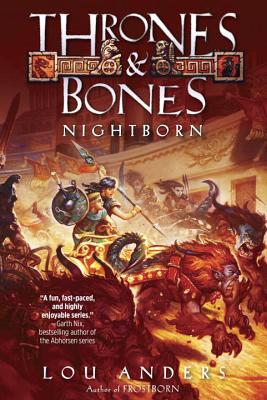 This is book number 2 in the Thrones and Bones series.

For fans of Lloyd Alexander and Brandon Mull comes Book 2 in the acclaimed Thrones and Bones fantasy-adventure trilogy that began with Frostborn.

Karn Korlundsson is a gamer. Not a riddle solver. But in order to rescue his best friend, Thianna Frostborn, he will need to travel to the faraway city of Castlebriar (by wyvern), learn how to play a new board game called Charioteers (not a problem), decipher the Riddle of the Horn, and tangle with mysterious elves.

Meet Desstra. She’s in training to join the Underhand—the elite agents of the dark elves. When she crosses paths with Karn, she is not all that she appears to be.

Everyone is chasing after the horn of Osius, an ancient artifact with the power to change the world. The lengths to which Karn will go in the name of friendship will be sorely tested. Who knew that solving a riddle could be so deadly?

The novel includes instructions for playing the board game Charioteers. Visit ThronesandBones.com for additional games, maps, character profiles, and more!

Praise for Frostborn
“Future fans of Tolkien and George R. R. Martin can happily cut their serial-fantasy teeth on this first book of an eventual series.” —Kirkus Reviews

“A powerful, fast-paced tale. . . . The setting is rich, the characters well-defined, and the danger ever-paramount.” —Publishers Weekly, Starred

“An excellent choice for readers new to the genre. The themes of staying true to oneself, teamwork, and individuality will resonate with readers.” —School Library Journal

“The most delightful fantasy I have read in ages. . . . Put me on the waiting list for book two!” —Amy Plum, international bestselling author of the Die for Me series

Lou Anders is the recipient of a Hugo Award for editing and a Chesley Award for art direction. He has published over 500 articles and stories on science fiction and fantasy television and literature. A prolific speaker, Anders regularly attends writing conventions around the country. He and his family reside in Birmingham, Alabama. You can visit Anders online at louanders.com and ThronesandBones.com, on Facebook, and on Twitter at @ThronesandBones.