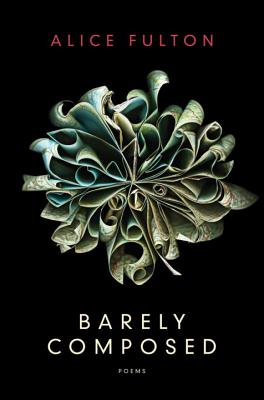 "Fulton is exactly the kind of poet Shelley had in mind when he said 'Poets are the unacknowledged legislators of the world.' " —Verse

In this eagerly awaited collection of new poems—her first in over a decade—Alice Fulton reimagines the great lyric subjects—time, death, love—and imbues them with fresh urgency and depth. Barely Composed unveils the emotional devastations that follow trauma or grief—extreme states that threaten psyche and language with disintegration. With rare originality, the poems illuminate the deepest suffering and its aftermath of hypervigilance and numbness, the "formal feeling" described by Emily Dickinson.


Elegies contemplate temporal mysteries—the brief span of human/animal life, the nearly eternal existence of stars and nuclear fuel, the enduring presence of the arts—and offer unsparing glimpses of personal loss and cultural suppressions of truth. Under the duress of silencing, whether chosen or imposed, language warps into something uncanny, rich, and profoundly moving. Various forms of inscription—coloring book to redacted document—enact the combustible power of the unsaid.

Though "anguish is the universal language," there also is joy in the reciprocity of gifts and creativity, intellect and intimacy. Gorgeous vintage rhetorics merge with incandescent contemporary registers, and this recombinant linguistic mix gives rise to poems of disarming power. Visionaries—truth tellers, revelators, beholders—offer testimony as beautiful as it is unsettling.

Shimmering with the "good strangeness of poetry," Barely Composed bears witness to love’s complexities and the fragility of existence. In the midst of cruelty, a world in which “the pound is by the petting zoo,” Fulton’s poems embrace the inextinguishable search for goodness, compassion, and "the principles of tranquility."

Alice Fulton is the author of ten books, most recently Barely Composed: Poems. Her honors include a MacArthur Fellowship, the Bobbitt Prize for Poetry from the Library of Congress, and an American Academy of Arts and Letters Award. She lives in upstate New York.
Fulton removes language from its standard literary and idiomatic proprieties… Her varied techniques are particularly appealing…an alchemy of language and the world beyond the authentic representation of the personal. But she can do expressive representation too.
— Daisy Fried - New York Times Book Review

Elegant and experimental at once, committed to operating at the freshest tip of the mind, these poems pry through our own readerly boundaries.
— Poetry International

Fulton sounds at home in the unknown, her music rising like wind whistling between all these ‘finite things.’ You may not mind getting lost with such a guide.
— Michael Andor Brodeur - Boston Globe

Tackles enduring topics—time, death, love—with a mixture of elegance and agony… All of this blossoms into a dark beauty that makes these poems glisten.
— Elizabeth Lund - Washington Post

At times musical, yes, but at other times a weapon, or a stick to prod open the underbelly of some dark dream…sonorous, rich, and full of surprises.
— Casey Patrick - Rumpus