Why?: Explaining the Holocaust (Hardcover) 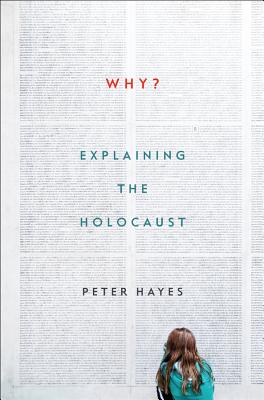 Why?: Explaining the Holocaust (Hardcover)

Featured in the PBS documentary, "The US and the Holocaust" by Ken Burns, Lynn Novick and Sarah Botstein

Despite the outpouring of books, movies, museums, memorials, and courses devoted to the Holocaust, a coherent explanation of why such ghastly carnage erupted from the heart of civilized Europe in the twentieth century still seems elusive even seventy years later. Numerous theories have sprouted in an attempt to console ourselves and to point the blame in emotionally satisfying directions—yet none of them are fully convincing. As witnesses to the Holocaust near the ends of their lives, it becomes that much more important to unravel what happened and to educate a new generation about the horrors inflicted by the Nazi regime on Jews and non-Jews alike.

Why? dispels many misconceptions and answers some of the most basic—yet vexing—questions that remain: why the Jews and not another ethnic group? Why the Germans? Why such a swift and sweeping extermination? Why didn’t more Jews fight back more often? Why didn’t they receive more help? While responding to the questions he has been most frequently asked by students over the decades, world-renowned Holocaust historian and professor Peter Hayes brings a wealth of scholarly research and experience to bear on conventional, popular views of the history, challenging some of the most prominent recent interpretations. He argues that there is no single theory that “explains” the Holocaust; the convergence of multiple forces at a particular moment in time led to catastrophe.

In clear prose informed by an encyclopedic knowledge of Holocaust literature in English and German, Hayes weaves together stories and statistics to heart-stopping effect. Why? is an authoritative, groundbreaking exploration of the origins of one of the most tragic events in human history.

Peter Hayes is professor of history and German and Theodore Zev Weiss Holocaust Educational Foundation Professor of Holocaust Studies Emeritus at Northwestern University, and chair of the Academic Committee of the United States Holocaust Memorial Museum.
This clearly written, cogently argued and researched book....courageously confronts some of the thorniest issues raised by the Shoah, making Why?: Explaining the Holocaust an indispensable work for specialists and informed readers alike.

In his mind-opening 2017 book, Why?: Explaining the Holocaust, Peter Hayes says the subject ‘continues to resist comprehension.’ Resist but not defy. His many conclusions include the awesome—for better or worse—power of individual agency: No Hitler, no Holocaust. But Hitler began tentatively, with small measures. Hayes concludes his book with a German proverb: ­Wehret den Anfangen—beware the beginnings.

Superbly written and researched, synthesizing the classics while digging deep into a vast repository of primary sources.
— Wall Street Journal

Explain? Impossible. But Hayes’s timely, accessible book sheds light on the horror. In certain circumstances it reminds us that humans can rationalize anything.
— People

Hayes has written a valuable book for today’s challenges, with perspective and sensitivity, that is, indeed, authoritative, readable and revealing.
— St. Louis Post-Dispatch

I recommend this book for a lucid, well-crafted introduction to the history of the Holocaust. Unlike most works on the history of the Holocaust....Hayes’ book concentrates....on helping readers to understand why
the Holocaust occurred when it did, in the manner it did and with the results it produced. It offers readers a window onto how historians go about finding answers to these questions.
— David Engel, professor of Holocaust studies and chair of Hebrew and Judaic studies at New York University - Jewish Telegraph Agency

A fascinating, remarkably lucid, compulsively readable explanation of how the mass murder of Europe’s Jews came about and how it transpired in the middle of the twentieth century.
— David I. Kertzer, Pulitzer Prize–winning author of The Pope and Mussolini

Calmly argued, alert to the most recent scholarship about the Holocaust, and full of good sense, Peter Hayes’s new book carries an essential title asked universally: Why? Why did such a thing happen? Taking up
this most difficult of challenges, his pages answer questions that many analysts dare not even ask, let alone answer. That is why this work should be required reading, both for specialists and for those who seek more recently to understand.
— Michael R. Marrus, Chancellor Rose and Ray Wolfe Professor Emeritus of Holocaust Studies at the University of Toronto and author of Lessons of the Holocaust

A short review cannot do justice to the breadth and depth of the scholarship exhibited in each chapter. This authoritative volume is mandatory for scholars and armchair historians interested in the origins, course, and outcomes of the Holocaust. Essential for all levels/libraries.
— Choice

Peter Hayes poses eight key questions about the Holocaust and then analyzes and answers them with enviable mastery, succinctness, and clarity. Hayes’ arguments are presented with a scholarly authority that is judicious, compelling, and accessible. A gem of a book.
— Christopher R. Browning, Frank Porter Graham Professor of History Emeritus, University of North Carolina at Chapel Hill

This book is outstanding—beautifully written, with enviable clarity of argument, countless instructive details, and memorable, evocative images. On every issue around which there has been either controversy or confusion—from the interrelationships between the Holocaust and the mass murder of individuals with disabilities to the motivations of the perpetrators, the economics of the killing operations, the special situation of Poland, the experiences of slave laborers, or the dimensions of Jewish resistance—Peter Hayes helpfully distills the debates and provides judicious, orienting assessments. A masterful, indispensable, landmark work.
— Dagmar Herzog, distinguished professor of history and the Daniel Rose Faculty Scholar at the Graduate Center, City University of New York

An original, informative and essential addition to the field of Holocaust Studies. It should be required reading for every introductory course on the Holocaust.
— Lawrence L. Langer, author of Holocaust Testimonies: The Ruins of Memory and Using and Abusing the Holocaust

The book breathes the spirit of serious learning but is at the same time extremely well written and readable....Hayes gives conclusive, well considered, and persuasive answers to many Holocaust questions. In the introduction, he promises a 'comprehensive stocktaking.’ In that he has succeeded.
— Wolfgang Benz, Director of the Center for Research on Antisemitism of the Technische Universität Berlin