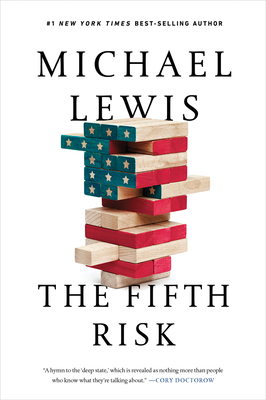 The New York Times Bestseller, with a new afterword

Michael Lewis’s brilliant narrative of the Trump administration’s botched presidential transition takes us into the engine rooms of a government under attack by its leaders through willful ignorance and greed. The government manages a vast array of critical services that keep us safe and underpin our lives from ensuring the safety of our food and drugs and predicting extreme weather events to tracking and locating black market uranium before the terrorists do. The Fifth Risk masterfully and vividly unspools the consequences if the people given control over our government have no idea how it works.

Michael Lewis is the best-selling author of Liar’s Poker, Moneyball, The Blind Side, The Big Short, The Undoing Project, and The Fifth Risk. He lives in Berkeley, California, with his wife and three children.
A hymn to the 'deep state,' which is revealed as nothing more than people who know what they're talking about.
— Cory Doctorow

Fascinating—and at times harrowing…Lewis tells an important and timely story, one that all of us who pay for, care about, and want government to work should hear.
— Brian Naylor - NPR

Lewis has written a countercultural, almost subversive, book: one that praises the intellectual curiosity, dedication, foresight and sense of mission he finds among America’s federal workers.
— Carlos Lozada - Washington Post

[A] spellbinding, alarming analysis of the most serious threats to Americans’ safety happening now from inside the U.S. government.
— Don Oldenburg - USA Today

[The Fifth Risk is] so prescient it’s goosepimpling.