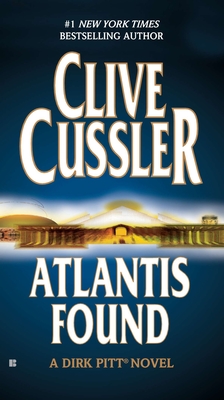 This is book number 15 in the Dirk Pitt Adventure series.

Marine explorer Dirk Pitt faces off against an elite army from an era gone-by in order to uncover the secrets of an ancient civilization in this #1 New York Times-bestselling series.

A group of anthropologists uncover strange inscriptions on the wall of a Colorado mine just as an explosion traps them deep within the earth. But their work won’t stay buried long. Dirk Pitt is on hand during the blast and quick to initiate a rescue operation. He is then tapped to lead a research crew on behalf of the U.S. National Underwater and Marine Agency to further study these uncanny artifacts. And that’s when his ship is set upon and nearly sunk by an impossibility—a vessel that should have died 56 years before.

Clearly, another group knows about the relics of this long-forgotten but highly-advanced seafaring culture. And they’ll stop at nothing to keep the rest of the world in the dark.
Clive Cussler is the author of more than fifty books in five bestselling series, including Dirk Pitt, NUMA Files, Oregon Files, Isaac Bell, and Fargo. His life nearly parallels that of his hero Dirk Pitt. Whether searching for lost aircraft or leading expeditions to find famous shipwrecks, he and his NUMA crew of volunteers have discovered more than seventy-five lost ships of historic significance, including the long-lost Confederate submarine Hunley, which was raised in 2000 with much press publicity. Like Pitt, Cussler collects classic automobiles. His collection features more than eighty examples of custom coachwork. Cussler lives in Arizona and Colorado.