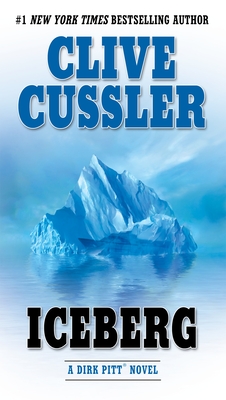 This is book number 2 in the Dirk Pitt Adventure series.

A routine survey mission over the North Atlantic exposes a missing luxury yacht frozen inside a million-ton mass of ice. The ship had vanished en route to a secret White House rendezvous, making it the responsibility of the National Underwater and Marine Agency to find out what happened. In other words, it's time for Dirk Pitt to cut his sunny, California vacation short and get back to work.

Of course, when Pitt arrives on the scene and discovers the charred remains of the entire crew, who burned alive but never left their posts, he begins to suspect the tragic loss of the ship to be only the first, deliberate step in a far more sinister plan.
Clive Cussler is the author of more than fifty books in five bestselling series, including Dirk Pitt, NUMA Files, Oregon Files, Isaac Bell, and Fargo. His life nearly parallels that of his hero Dirk Pitt. Whether searching for lost aircraft or leading expeditions to find famous shipwrecks, he and his NUMA crew of volunteers have discovered more than seventy-five lost ships of historic significance, including the long-lost Confederate submarine Hunley, which was raised in 2000 with much press publicity. Like Pitt, Cussler collects classic automobiles. His collection features more than eighty examples of custom coachwork. Cussler lives in Arizona and Colorado.
"Cussler has developed and patented a vibrant, rollicking narrative style that seldom shows signs of relenting." -Chicago Tribune