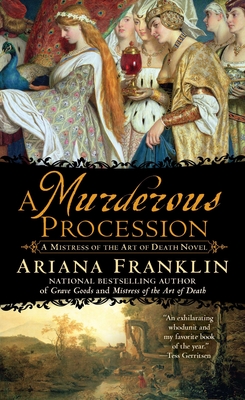 “Adelia is back in this fourth (and my favorite!) installment of the Mistress of the Art of Death series. King Henry II assigns Adelia to accompany his daughter, Joanna, to Italy for her wedding. Mysterious deaths occur amongst the royal procession, and Adelia is the prime suspect. She must uncover the killer and clear her name before the murderer's ultimate goal is accomplished. Once you start this book you won't want to put it down!”
— Erin Kurup, Book House of Stuyvesant Plaza, Albany, NY

Tess Garritsen calls this one "my favorite book of the year!"

In 1176, King Henry II sends his daughter Joanna to Palermo to marry his cousin, the king of Sicily. Henry chooses Adelia Aguilar to travel with the princess and safeguard her health. But when people in the wedding procession are murdered, Adelia and Rowley must discover the killer's identity, and whether he is stalking the princess or Adelia herself.
Ariana Franklin is the pen name of British writer Diana Norman. A bestselling author and former journalist, she lives in England with her husband, the film critic Barry Norman.