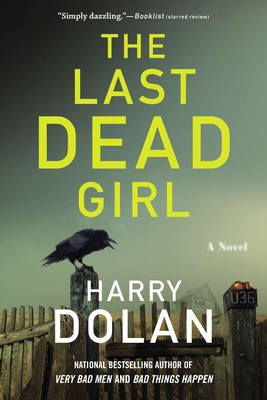 This is book number 3 in the David Loogan series.

On a rainy night in April, a chance encounter draws David into a romance with Jana Fletcher, a beautiful young law student. Jana is an enigma: living in a run-down apartment with only the barest of possessions, sporting a bruise on her cheek that she refuses to explain. David would like to know her secrets, but he lets them lie—until it’s too late.

When Jana is brutally murdered, the police consider David a prime suspect. But as he sets out to uncover the truth, he soon learns that Jana’s death may be related to an earlier murder, one that she was obsessed with during the last weeks of her life.

And as he retraces her steps, he begins to realize that he’s treading a very dangerous path—and that her killer is watching every move he makes.
Harry Dolan is the bestselling author of Bad Things Happen and Very Bad Men, both featuring David Loogan. He graduated from Colgate University, where he majored in philosophy and studied fiction writing with the novelist Frederick Busch. A native of Rome, New York, he now lives in Ann Arbor, Michigan, with his partner, Linda Randolph.
Praise for the novels of Harry Dolan

“Harry Dolan knows how to write a book that grabs you.” —The Arizona Republic

“A neat technical achievement [and] a nuanced piece of fiction.” —Tom Nolan, The Wall Street Journal

“A riveting crime novel…Relentless pacing, a wry sense of humor, and an engaging protagonist add up to another winner for Dolan.” —Publishers Weekly

“The rare crime novel with something for everyone who reads crime fiction.” —Kirkus Reviews (starred review)

“Unless you’re clairvoyant, you will be blindsided at least four times in this slowly unraveling story of an oddly normal, single-minded killer… Simply great storytelling.” —San Antonio Express-News