Murder, She Wrote: Blood on the Vine (Murder She Wrote #15) (Mass Market) 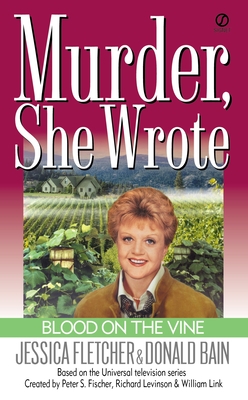 Murder, She Wrote: Blood on the Vine (Murder She Wrote #15) (Mass Market)

This is book number 15 in the Murder She Wrote series.

Jessica Fletcher must solve a wine country caper when she takes a trip to Napa Valley in this mystery in in the long-running series.

Jessica Fletcher is visiting California wine country while doing research for her next book, and invites her old friend, Scotland Yard detective George Sutherland to join her at a cozy Bed and Breakfast. No sooner do they arrive than they find the valley abuzz over the murder of a waiter at the restaurant owned by infamous ex-Hollywood heavyweight Bill Ladington. Ladington’s blatant womanizing and involvement in a bitter vineyard land dispute have already marked him as a dubious character—and a possible suspect.

But when Ladington turns up dead himself from a supposed “suicide,” Jessica knows that a murderer is on the loose—and with a little help from George, she must try and bottle up a motive for murder from an extensive list of less-than-vintage suspects...

Jessica Fletcher is a bestselling mystery writer who has a knack for stumbling upon real-life mysteries in her various travels. Donald Bain, her longtime collaborator, was the writer of more than one hundred and twenty books, many of them bestsellers.