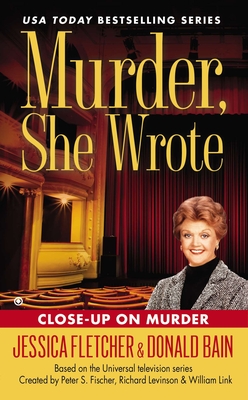 This is book number 40 in the Murder She Wrote series.

Cabot Cove is being invaded—by Hollywood. One of Jessica’s older novels is being adapted into a big-budget movie. The producer has decided to shoot on location, since the book was loosely based on a murder that shocked Cabot Cove several years earlier.

Unfortunately, everyone on the set seems to have a hidden agenda. A novice director wants his shot at the big time. The lead actress has many unreasonable demands. Her astrologer sees trouble in the stars. And a stranger on the movie lot is stalking Jessica.

When a body is found on the set, a strip of celluloid film wrapped around its neck, there’s a cast and crew of possible suspects. With tensions between locals and the Hollywood horde mounting, Jessica must find the killer before anyone else is left on the cutting room floor.
Jessica Fletcher is a bestselling mystery writer who has a knack for stumbling upon real-life mysteries in her various travels. Donald Bain, her longtime collaborator, is the writer of more than one hundred books, many of them bestsellers.