Murder, She Wrote: A Date with Murder (Murder She Wrote #47) (Mass Market) 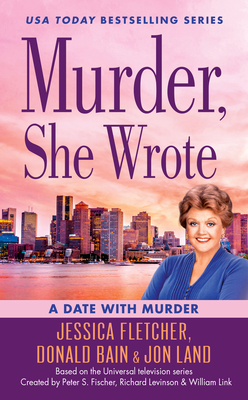 Murder, She Wrote: A Date with Murder (Murder She Wrote #47) (Mass Market)

This is book number 47 in the Murder She Wrote series.

Jessica Fletcher investigates a friend's murder and a dangerous dating service in the latest entry in this USA Today bestselling series...

Jessica Fletcher takes up the cause of her good friend Barbara "Babs" Wirth after Babs' husband Hal suffers a fatal heart attack that Jessica has reason to believe was actually murder. At the heart of her suspicions lies a sinister dating site Hal had used while he and Babs were having marital issues--a site that may be complicit in somehow swindling him out of millions.

Jessica's investigation reveals that Hal was far from the only victim and when his former business partner is also killed, a deadly pattern emerges. Jessica teams up with a brilliant young computer hacker to follow the trail but as she gets closer to the truth, two near misses force her to realize that she may very well be the next victim.

The stakes have never been this high as Jessica finds herself being stalked by the killer she is trying to catch. She must now set the perfect trap to avoid her very own date with murder.
Jessica Fletcher is a bestselling mystery writer who has a knack for stumbling upon real-life mysteries in her various travels. Donald Bain, the author of more than one hundred and twenty books, collaborates, with Jon Land on this bestselling series.
Praise for Murder, She Wrote: A Date with Murder

“Series fans will be pleased to find this popular franchise in Land's able hands.”—Publishers Weekly

“A true masterpiece in the genre.”—Suspense Magazine

“Land deftly captures not only the show's essence, but Bain's style from the previous books in a cozy murder mystery brimming with suspense and heart.”—San Francisco Book Review

“Murder, She Wrote that reads like a long-lost episode of the early '80s TV show, and readers will hear Angela Lansbury’s voice in Land’s spot-on dialogue.”—The Press-Republican

Praise for the USA Today bestselling Murder, She Wrote Series

“Fresh and appealing...extremely satisfying. It pulled me in right from the beginning.”—Open Book Society