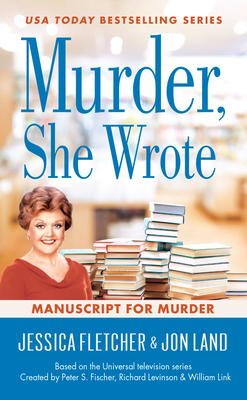 This is book number 48 in the Murder She Wrote series.

Jessica Fletcher investigates a mysterious manuscript with deadly consequences in the latest mass-market reprint in this USA Today bestselling series....

Jessica Fletcher has had plenty to worry about over her storied career, both as a bestselling novelist and as an amateur sleuth. But she never had any reason to worry about her longtime publisher and trusted friend, Lane Barfield. When mounting evidence of financial malfeasance leads to an FBI investigation of Lane, Jessica can't believe what she's reading.

So when Barfield turns up dead, Jessica takes on the task of proving his innocence. Sure enough, Jessica's lone-wolf investigation turns up several oddities and inconsistencies. Jessica knows something is being covered up, but what exactly? The trail she takes to answer that question reveals something far more nefarious is afoot, involving shadowy characters from the heights of power in Washington. At the heart of Jessica's investigation is a manuscript Barfield had intended to publish, after all other publishers had turned it down. The problem is the manuscript has disappeared, with all traces of its submission and very existence having been wiped off the books.

With her own life now in jeopardy, Jessica refuses to back off and sets her sights on learning the contents of that manuscript and what about it might have led to several murders. Every step she takes brings her closer to the truth of what lies in the pages, as well as to the person who penned them.
Jessica Fletcher is a bestselling mystery writer who has a knack for stumbling upon real-life mysteries in her various travels. Jon Land, author of more than forty books, coauthors this bestselling series.
Praise for Manuscript for Murder:

"A tight, twisty tale that keeps you guessing until the final page and gasping when you've finally turned it. Jessica Fletcher has never been better!"—Lisa Scottoline, #1 New York Times bestselling author

"Land takes the action and suspense to a new level, one not found in previous installments in the series. This is more than just another whodunit, it’s an action book that brings Jessica’s character into a whole new light."—Suspense Magazine

“Land is pushing the series into new territory, blurring the boundary between cozy mysteries and thrillers. Or perhaps he is forming a new genre: the cozy thriller...A rip-roaring thrill both for Jessica and her readers.” —BookTrib

“A great mystery-thriller, packed with crackling cliffhangers and mouth-dropping moments, as riveting as it is relentless. This may not be exactly your grandmother’s or mother’s Jessica Fletcher, but in Land’s able hands the iconic Murder, She Wrote is without question the finest mystery series being written today. Call Manuscript for Murder a thriller if you want, so long as you call it not to be missed.” —Bestsellersworld

Praise for the USA Today bestselling Murder, She Wrote Series:

"Series fans will be pleased to find this popular franchise in Land's able hands."—Publishers Weekly

“Fresh and appealing…extremely satisfying. It pulled me in right from the beginning.”—Open Book Society